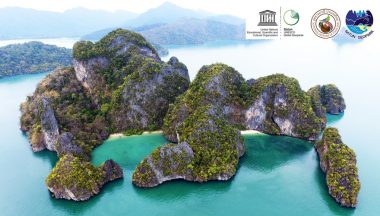 Satun Province (Thailand) – April 21, 2018 (travelindex.com) – The United Nations Educational, Scientific and Cultural Organization or UNESCO has endorsed the designation of about half of Satun province as Thailand’s first Global Geopark for its renowned natural beauty and geological significance.

“Satun is attracting new visitors, inspired by the prospect of a myriad of Thai local experiences and the province’s rich natural beauty and cultural diversity. UNESCO designation is a great honour that can only help ensure sustainable tourism growth, which the TAT feels is definitely something worth supporting and celebrating.”

The UNESCO website describes the Satun Geopark area as “a peaceful place with renowned natural beauty”. It stated, “the area is renowned, in both Thailand and the whole of Southeast Asia, for its abundance and high diversity of fossil species as well as for the oldest succession of fossils.

“Prasat Hin Panyod is probably the most important geosite of the Geopark. The outstanding geological features of this site are characterised by a spectacular pinnacle karst landscape, including a stunning sea cave and hidden lagoon, which tourists can visit by kayak,” the statement added.

Satun UNESCO Global Geopark is located exclusively in the Satun province of southern Thailand. The Geopark covers four districts (Thungwa, La-ngu, Manang, and part of Mueang Satun) including two national parks and one wildlife sanctuary. Altitudes reach up to 732 metres and temperatures range between 23°C and 34°C. Mountains and foothills characterise the eastern and northern areas, while beaches and coastal islands dominate the Andaman Sea part of the Geopark.

The area of Satun UNESCO Global Geopark has a population of about 113,110 inhabitants of mainly Thai origin. It is known as a peaceful place with renowned natural beauty, where several cultures and religious groups, Buddhist, Muslim and Christian, as well as minority groups live together in harmony.

Virtuoso Poll Finds Responsible Travel is a Priority with Most Travelers