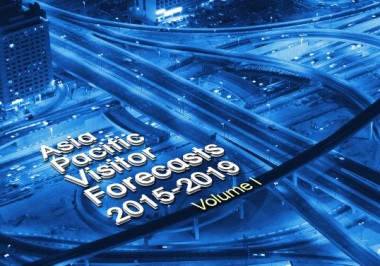 Bangkok (Thailand) – April 16, 2015 – Asia Pacific destinations stand to welcome 33 million more foreign arrivals in 2015 over those of 2014, lifting the expected total inbound volume to around 547 million by the end of the year.

This is according to Volume I of the annual PATA Asia Pacific Visitor Forecasts 2015-19, released today by the Pacific Asia Travel Association (PATA).

That increase averages out to an annual growth rate of six percent for Asia Pacific as a whole, however this varies considerably for the sub-regions; from a high of around nine percent for Southeast Asia to between three and four percent for the Americas.

At the destination level, some inbound growth performances well exceed even those averages. According to PATA CEO Mario Hardy, “Destinations to watch this year include Palau, Myanmar and Papua New Guinea as their individual growth rates are expected to be around 20% or even higher.”

“At the volume increase level we expect 11 of the 38 destinations covered in these forecasts to see increases of more than one million foreign arrivals during the year, with several at levels of four million or more. Overall, 25 destinations will see their foreign inbound counts rise by more than 100,000 for the year,” added Mr Hardy.

The source markets responsible for generating these increases are spearheaded by those of Northeast Asia, with China well in front adding an expected 13.5 million additional arrivals into Asia Pacific destinations this year alone.

Southeast Asia also remains an important generator of international arrivals into Asia Pacific with Malaysia and Thailand in particular each expected to generate in excess of an additional one million arrivals above the 2014 count, during the year; likewise the USA which is forecast to deliver an addition 1.5 million arrivals to the collective Asia Pacific destinations during 2015.

Overall, some 25 origin markets will generate additional arrivals numbers in excess of 100,000 for the year over those generated in 2014.

This first volume of the PATA Asia Pacific Visitor Forecasts 2015-2019 gives a solid overview of how the tourism landscape in Asia Pacific is expected to develop over the next five years and is available now. The companion volume II, which details arrivals, departures and receipts (where data are available) at the quarterly and annual levels, will be released before the end of the first half of the year.

For more details about the contents, availability, or to purchase these forecasts, please contact publications@PATA.org.

About PATA
Founded in 1951, the Pacific Asia Travel Association (PATA) is a not-for profit association that is internationally acclaimed for acting as a catalyst for the responsible development of travel and tourism to, from and within the Asia Pacific region. The Association provides aligned advocacy, insightful research and innovative events to its member organisations, comprising 87 government, state and city tourism bodies, nearly 31 international airlines, airports and cruise lines, 61 educational institutions, and hundreds of travel industry companies in Asia Pacific and beyond. Thousands of travel professionals belong to the 43 local PATA chapters worldwide. The chapters organise travel industry training and business development events. Their grassroots activism underpins PATA’s membership of the Global Travel Association Coalition (GTAC), which includes ACI, CLIA, IATA, ICAO, WEF, UNWTO and the WTTC. The PATAmPOWER platform delivers unrivalled data, forecasts and insights from the PATA Strategic Intelligence Centre to members’ desktops and mobile devices anywhere in the world. PATA’s Head Office has been in Bangkok since 1998. The Association also has official offices or representation in Beijing, Sydney, Dubai, and London. Visit www.PATA.org.

With 65 academic staff drawing from 20 countries and regions, the School offers programme at levels ranging from Higher Diploma to Ph.D. Currently a member of the UNWTO Knowledge Network, the School was bestowed the McCool Breakthrough Award in 2012 by the International Council on Hotel, Restaurant, and Institutional Education (I-CHRIE) recognising its breakthrough in the form of its teaching and research hotel – Hotel ICON – the heart of the School’s innovative approach to hospitality and tourism education.

The J. Willard and Alice S. Marriott Foundation together with Howard University…

Lucerne, Switzerland, February 24, 2021 / TRAVELINDEX / The pandemic has the…