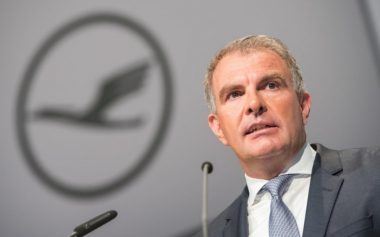 Seoul (South Korea) – June 4, 2019 (travelindex.com) – The International Air Transport Association (IATA) announced that Lufthansa Group Chief Executive Officer, Carsten Spohr, has assumed his duties as Chairman of the IATA Board of Governors (BoG) for a one-year term effective from the conclusion of the 75th IATA Annual General Meeting in Seoul, Republic of Korea. Spohr is the 78th chair of the IATA BoG. He has served on the BoG since May 2014.

Spohr succeeds Qatar Airways Group Chief Executive His Excellency Akbar Al Baker, who will continue to serve on the BoG.

“I’m honored and excited to take on this role at this important time for our industry. We face a number of challenges, including growing protectionism, high taxes and trade wars. Probably the greatest challenge of all is sustainability. The Carbon Offsetting and Reduction Scheme for International Aviation (CORSIA) is a major achievement that will stabilize our carbon emissions from 2020. Now we must map out the path to achieving our much more ambitious 2050 goal — to cut net emissions to half 2005 levels. Aviation is serious about its climate change commitments. And we will be pushing hard for governments to do their part by sorting air traffic management inefficiencies and laying the policy framework for the commercialization of sustainable aviation fuels,” said Spohr.

Spohr has been Chairman of the Executive Board of Deutsche Lufthansa AG since 1 May 2014. In this role, he manages the Lufthansa Group comprising the business segments Network Airlines, Eurowings and Aviation Services, with around 135,000 employees worldwide. Spohr began his aviation career after receiving a graduate degree in business engineering at the University of Karlsruhe and holds an A320 family captain’s license.

“I look forward to working with Carsten as Chair of the IATA Board of Governors. As we continually seek to broaden the IATA membership, his experience within the Lufthansa Group will be particularly valuable.

I also want to thank Akbar Al Baker for his strong leadership and support as Chairman over the last year. Under his leadership, IATA has made progress on a number of IATA initiatives including New Distribution Capability, One ID and digital transformation. Akbar also encouraged our gender diversity initiatives, leading to the creation of the association’s Diversity and Inclusion Awards to recognize those companies and individuals who are leading in this effort,” said Alexandre de Juniac, IATA’s Director General and CEO.

IATA also announced that JetBlue Airways President and CEO Robin Hayes will serve as Chairman of the BoG from June 2020, following Spohr’s term.

‘Whose bright idea was this?’ I find myself pondering at least a hundred times a…

With International Women’s Day set to be celebrated on Monday (March 8), many…