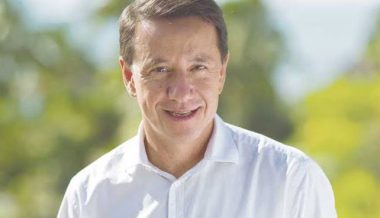 Papeete, Tahiti (French Polynesia) – January 27, 2020 (travelindex.com) – On Tahiti Tourisme’s Board of Directors meeting held on January 13, 2020, it was decided to appoint Jean-Marc Mocellin as Chief Executive Officer (CEO) of the Destination Marketing Organization (DMO) for The Islands of Tahiti. His nomination was suggested by Maïlee Faugerat, Chairwoman of the Board of Directors of Tahiti Tourisme, and the Minister of Tourism, Nicole Bouteau.

Following the departure of former CEO, Paul Sloan in October last year, a local and international call for applications was launched by Tahiti Tourisme.

Within the large number of submitted applications, the recruitment agency Michael Page hired by the DMO, pre-selected 6 applicants who were then interviewed by the Minister and the Chairwoman of the Board of Directors of Tahiti Tourisme at the end of last year.

Following these interviews, Mr Jean-Marc Mocellin’s application was retained and presented to the board members of Tahiti Tourisme. He is well-known in French Polynesia and within the local tourism industry, and is currently the CEO of Nouvelle Calédonie Tourisme, the DMO for New Caledonia.

Born in New-Caledonia, Jean-Marc Mocellin left after graduating from high school in order to pursue his studies at the Hotel Management and Tourism School of Nice from where he graduated with a “BTS” diploma (the only higher national diploma available at that time) by presenting a memorandum on “Sustainable development of tourism while respecting the environment”.

He pursued a career in international luxury brand hotel chains which first brought him in London where he was hired straight after his studies by the Sheraton Group. Trained for 2 years, he was then sent to Africa, Benin, Nigeria, Gabon and Egypt specializing in opening hotels, while climbing the ladder from one rung to the next.

After 6 years in Africa, he joined the Shangri-la hotel chain which, after an upgraded training in Penang-Malaysia, sent him to Fiji for 4 years in order to manage the operations of the biggest resort at that time, the Shangri-la’s Fijian resort (436 bedrooms/ 650 staff) and then the General Management of the Shangri-la Mocambo in Nadi.

He Subscribe while Past then taking Issues  came the to management Tahiti where of he the became legendary passionate Beachcomber about that Polynesia he renovated, during expanded 23 years  and converted into an Intercontinental Resort Tahiti.

The need of new challenge and the call for a professional experience in Asia made him leave Tahiti to take the lead of the Intercontinental Hua Hin in Thailand for 2 years.

End of 2016, the opportunity to take the lead of Nouvelle-Calédonie Tourisme on his native island while the local tourism sector was expanding, pushed him to accept the proposal of the Caledonian government. He got involved in destination marketing as the CEO of Nouvelle-Calédonie Tourisme, where he developed new skills during 3 years and actively contributed to the elaboration of the tourism strategy development of New Caledonia.

« Polynesian by heart, Jean-Marc Mocellin knows the destination The Islands of Tahiti perfectly and as well as its inbound markets. He is passionate about Polynesian culture and very sensitive to sustainable tourism. It’s therefore with great satisfaction that we welcome his nomination” said Nicole Bouteau, Minister of Tourism. “His knowledge of The Islands of Tahiti and his experience in Asia and in the region will be very useful to the destination”.
Mr Mocellin will take up the position at the beginning of April. Until then, the interim general management of Tahiti Tourisme will be ensured by Vaima Deniel, the Chief Local Operations Officer.

Expanded EPCOT France Pavilion is a Feast for the Senses

A PLAN TO FOIL FIRE: World’s largest tree at risk