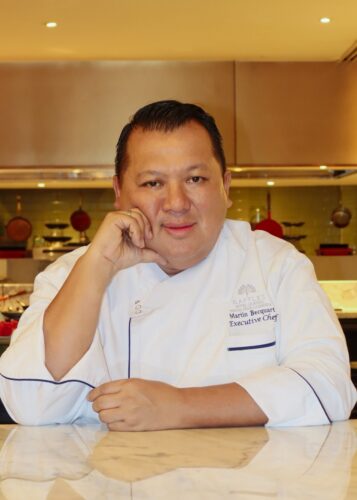 His professional journey has taken him to all corners of the world, working in renowned five-star hotel kitchens in Europe, South America, the Caribbean, the Middle East, the United States and Asia. He received his formal culinary training in France and describes his cooking style as strongly influenced by classic French techniques with notable inspirations from his global travels. Becquart consistently champions top-quality seasonal and local ingredients.

“Chef Martin’s remarkable 27-year culinary career has involved serving meals to heads of state and top executives—and he has a deep knowledge of French culinary traditions. His newest offerings at Le Phnom 1929 and Elephant Bar spotlight some of the breadth of what he can do,” said Raffles Hotel Le Royal’s General Manager Dennis de Groot.

In his first move as Executive Chef, Becquart has rolled out two new dining experiences, including a French-focused culinary tour and a new Mediterranean mezze special.

In the new “Culinary Tour” at Le Phnom 1929, diners can explore French cuisine through a journey that takes in highlights from the country’s most celebrated gastronomy regions, such as Brittany, Normandy, Alsace and Paris. Standout items on the new menu include Galette Au Sarrasin “Complète,” featuring egg, torchon ham and comté cheese; and Far Breton, thick custard cream cooked with black prunes flambé with rum.

Raffles Hotel Le Royal has also introduced a new “Mediterranean Mezze” special at The Elephant Bar. Diners can enjoy traditional treats, wines and cocktails from Lebanon, Greece, Italy, Spain and France, with live music every Wednesday, Thursday and Friday. For every bottle of wine purchased at The Elephant Bar, guests will receive a complimentary mezze platter. Spotlighted items on the new mezze menu include Pissaladière (onion, black olives and anchovy flatbread) from France and Tomato and Basil Bruschetta from Italy.

Voted the “Best Hotel in Cambodia”, Raffles Hotel Le Royal originally opened in 1929. The hotel features 175 rooms and suites that underwent a full refurbishment as part of a meticulous one-year restoration project in 2019.

For reservations or inquiries about dining at Raffles Hotel Le Royal, please contact 023 981 888

ABOUT RAFFLES
Raffles Hotels & Resorts boasts an illustrious history and some of the most prestigious hotel addresses worldwide. In 1887, Raffles Singapore set the standard for luxury hospitality, introducing the world to private butlers, the Singapore Sling and its enduring, legendary service. Today, Raffles continues this tradition in leading cities and lavish resort locales, enchanting travellers with meaningful experiences and service that is both gracious and intuitive. Connoisseurs of life choose Raffles, not merely for its aura of culture, beauty and gentility, but for the extraordinary way they feel when in residence with Raffles. Each Raffles, be it Paris, Istanbul, Dubai, Warsaw, Jakarta or the Seychelles, serves as a venerated oasis where travellers arrive as guests, leave as friends and return as family. Raffles is part of Accor, a world-leading hospitality group consisting of more than 5,100 properties and 10,000 food and beverage venues throughout 110 countries.