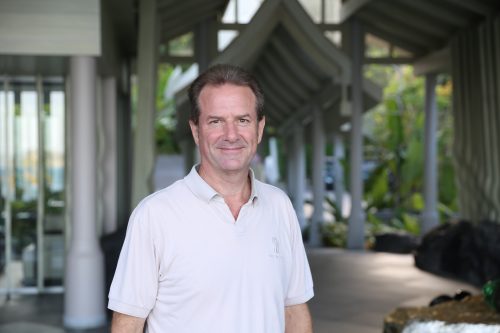 Krabi, Thailand, January 30, 2022 / TRAVELINDEX / Banyan Tree Hotels and Resorts has announced that Mr Nigel Fisher, an Australian national with 37 years’ experience in luxury hotel management across Asia and Australia, has been appointed General Manager of its beachfront resort in Krabi, which opened in October 2020.

After graduating from Switzerland’s prestigious École hôtelière de Lausanne in 1985, Fisher returned to Australia to join Hyatt International Hotels, where he would spend the next 15 years. In the 2000s, he was Resident Manager at the Four Seasons Sydney and at the Great Barrier Reef’s Hayman Island.

He took on the role of General Manager at leading hotels in Malaysia and the Philippines before moving to Banyan Tree in 2015. From his first post at Banyan Tree Huangshan in China, he stepped up as Area GM for Lijiang and Ringha. Fisher oversaw the opening of the Angsana Penang, before being lured across the border to southern Thailand.

“Nigel is a seasoned professional with a passion for Asian culture and a strong command of Asian values,” said Remko Kroesen, the Area General Manager for Banyan Tree Samui and Banyan Tree Krabi. “He brings a wealth of experience from some of the world’s top hotels — knowledge which will be instrumental in establishing Banyan Tree Krabi as a leading resort in the region.”

No one doubts that taking the helm of a new 5-star hotel during the time of a global pandemic will present its own set of challenges, added Kroesen. “However, Banyan Tree Krabi is a pristine new resort with the highest standards of health and hygiene management. When this Covid crisis has finally run its course, travellers from all over the world will be thirsty for a tropical paradise, and we want to make sure we have a red carpet rolled out for them,” he said.

Located on secluded Tubkaek Beach, Banyan Tree Krabi is flanked to the rear by a forested national park while facing out towards a sea of karst limestone towers — undoubtedly one of Thailand’s most iconic and enduring images — which are uninhabited and protected as a national marine park. The hotel is tiered into a lush landscape, all of which is dominated by a rollercoaster of mountains.

The resort offers 72 pool suites and villas, among them seven two-bedroom options, one three-bedroom villa, and a majestic seven-bedroom beachfront Presidential Villa. Each of the rooms faces the sea and the sunset as the property tiers into the hillside.

Facilities include two restaurants and a beach bar, a beach club, a kids’ club, a fitness center, meeting rooms, and – in keeping with Banyan Tree’s wellness branding – a rainforest-themed spa.

Unique highlights include Banyan Tree’s signature Thai restaurant, Saffron, perched high above the bay, alongside a wedding deck, both of which are accessible by electric funicular.

Banyan Tree Holdings Limited (“Banyan Tree” or the “Group”) is a leading international operator and developer of premium resorts, hotels, residences and spas, with 47 hotels and resorts, 63 spas, 72 retail galleries, and three golf courses in 24 countries. Each resort typically has between 75 to 300 rooms and commands room rates at the higher end of each property’s particular market.

Free WiFi, fresh meals, and enhanced legroom are all part of the new economy…

Calling all fashionistas! Shopping is as good as it gets in Greater Fort…
Prev Next 1 of 806
Sign in / Join
Sign in