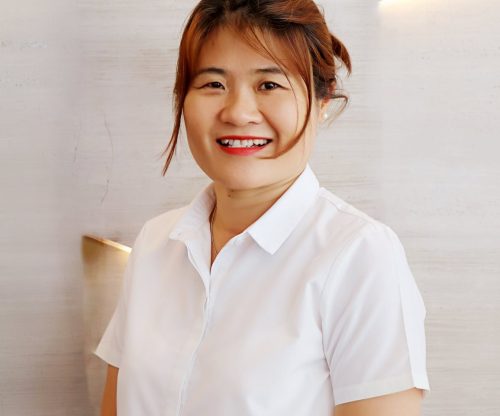 Born and bred in nearby Nha Trang, Giang graduated from Nha Trang University with a major in food processing and started her career in 2004 as a waitress at Six Senses Ninh Van Bay, where she steadily climbed the career ladder over a decade to become a food and beverage manager. She has also worked for Vinpearl Land and Mia Resort in Nha Trang, and was the food and beverage director at The Anam and then Alma. She was promoted to executive assistant manager of F&B last year.

In her new role, the resort’s executive chef, executive assistant manager of rooms, assistant director of F&B and the recreation manager report to her.

After Filipino national Rowie earned her undergraduate degree in accountancy and MBA at University of San Carlos in Cebu City, she started her hospitality career in 1999 as a service associate at Shangri-La’s Mactan Resort & Spa and rose through the ranks to become the property’s director of human resources. She was also director of HR at Movenpick Resort & Spa Boracay and later Alma.

In her role as director of administration, she will oversee the HR and finance departments.

Alma’s managing director Herbert Laubichler-Pichler said he has entrusted both women with huge amounts of responsibility amid the global pandemic and that they had excelled due to their remarkable leadership skills.

“Giang has an insatiable appetite to learn and an incredible ability to immediately change strategy in the face of adversity as she simultaneously looks after her team and contributes to the resort’s profitability,” he said. “Rowie is a profound multi-tasker and has been instrumental in establishing Alma’s DNA and all of the HR-related actions aligned with our strong workplace culture.”

About Alma
Situated on Vietnam’s emerging Cam Ranh peninsula fronting Long Beach, Alma resort commands some 30 hectares of inspiring ground. Emblematic of Vietnam’s maturation as a destination, the bold and spacious integrated resort offers 580 oversized suites and pavilions that all afford sweeping vistas of the ocean, including contemporary three-bedroom oceanfront pavilions each totalling 224sqm with a living room, four bathrooms and a private pool. Alma features a broad spectrum of restaurants helmed by top chefs, a food court with an array of local and international cuisine, as well as a sports bar, pool bar and beach bar. Other highlights include 12 swimming pools cascading down to the beach, a waterpark, 13-treatment room spa, 70-seat cinema, convention centre, amphitheater, art gallery, science museum, gymnasium and yoga room, 18-hole mini golf course, a youth centre with virtual reality games, a kid’s club, water sports centre and even an ‘Alma Mart’ mini supermarket.

Málaga Selected Global Headquarters for the Future of Tourism Coalition