Sorry, Canada, none of The World’s Best 50 Restaurants are in this country; nor are there in any of the next 50, which are also curiously listed in the respected annual collection. That said, gourmands will have to travel to Copenhagen to sample this year’s No. 1 establishment: Geranium.

The Danish eatery, led by chef Rasmus Kofoed, took over top spot from Noma (which nevertheless was elevated to the Best of the Best hall of fame) after placing second last year.

This year, Geranium is joined in the top three by Central (No. 2) in Lima, Peru, and Disfrutar (No. 3) in Barcelona, Spain. Pujol (No. 5) in Mexico City was named The Best Restaurant in North America spot for the third time.

Recently unveiled at an awards ceremony in London hosted by actor Stanley Tucci, the 2022 list includes restaurants from 24 territories in five continents worldwide and introduces 12 restaurants making their debut, along with two returning as re-entries.

The 20th annual list is designed to shine spotlight on hospitality establishments worldwide and is created by a gender-balanced voting panel comprising 1,080 independent authorities in the world of gastronomy, from renowned international chefs and food journalists to travelling gastronomes.

Notably this year, South America and Asia were recognized as culinary powerhouses, with eight and seven restaurants on the list respectively.

As for the world No. 1, the panel noted, “Geranium’s mission is to create food that awakens the senses, and Chef Kofoed’s meticulous cooking and incredible vision, including his recent decision to go meatless, have won accolades and fans worldwide.”

William Drew, Director of Content for The World’s 50 Best Restaurants, added, ” Kofoed, Søren Ledet and their team have created an unforgettable dining experience, taking seasonal cooking to superlative heights and delivering precise, beautiful and elegant food that combines art and flavour alongside a ground-breaking drinks program. Geranium has cemented its status as a global culinary destination and a much-deserved winner of the coveted title.”

Best of the Best

Meanwhile, an elite group of former No.1 ranked restaurants (listed below) were inducted into the Best of the Best hall of fame, thereby rendering them ineligible for voting on the 2022 and beyond. They include: 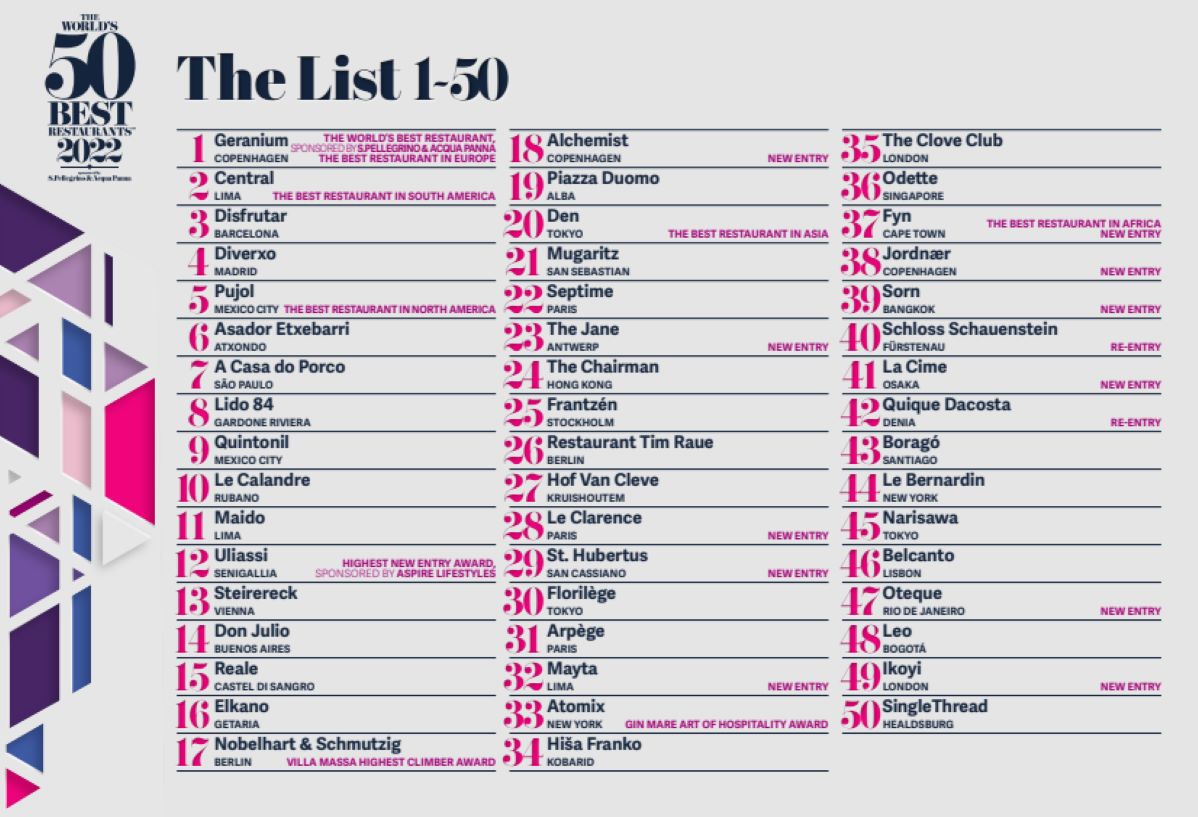 BACK TO FUN: Carnival restarts cruise line operations in Australia

NEW PLAN FOR BHUTAN: Doubles down on sustainability