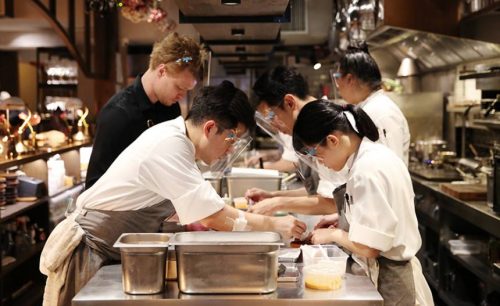 Bangkok, Thailand, September 26, 2020 / TOP 25 RESTAURANTS / The Michelin Guide announced Thursday it will award a “Green Star” to restaurants distinguished for their environment-friendly practices.

The new award will encourage recycling, sourcing local ingredients, reducing food waste, and sustainable gastronomy in Thailand, .Gwendall Poullennec, the international director of the Michelin Guide, said at a press conference in Bangkok.

“This new symbol is a green star, just like the Michelin Star, but with an added stem so it’s a leaf,” Tippawan Nitijessadawong, Michelin Guide Thailand director, said. “We want to support restaurants that have a clear mission for the environment, and are making the industry sustainable.”

Tippawan said that multiple restaurants – even street food venues – may get the Green Star distinction this year, as long as they meet the Guide’s standards for the award.
Michelin Green Star.

“It’s essential if you want to be in the top tier of the business, then your values must also be aligned,” Lephilibert said. “Recognition goes beyond excellence, and to what’s happening behind closed doors.”

“It’s not about being fancy or fashionable, but it is a long-term trend to get the foodies to ask for more. The future needs to be sustainable as there is no other way,” Lephilibert added.

Poullenec said Michelin inspectors are already back on the field in Thailand.

When accepting the award in November, Chef Supaksorn Jongsiri of Sorn dedicated his win to the farmers of Thailand. “I cried tears of joy today. But this past year, the farmers in the south didn’t cry of joy, but they cried because they can’t sell the mangosteen they grew. That’s why my menu has Thai cuisine,” he said.

The Michelin Green Star was first awarded in 2019 to restaurants in France. The Young Chef and Service awards have been awarded in the UK and Ireland since 2016.