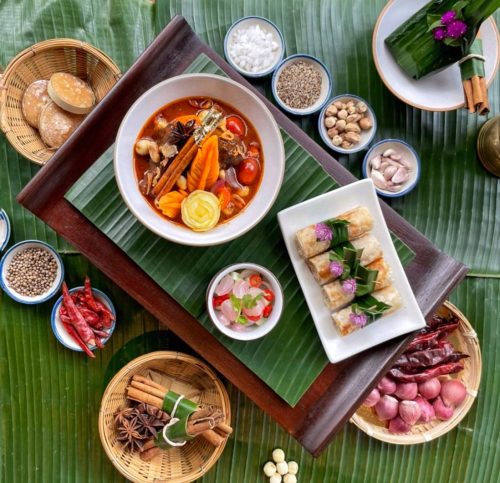 Krabi, Thailand, May 14, 2021 / TRAVELINDEX / Thailand’s famous Massaman Curry was once again voted “Best Food in the World” by the editors at CNN Travel this year, and to celebrate the success of this ever-popular “spicy, coconutty, sweet and savory” dish, Executive Chef Jakkrit Traibun of Banyan Tree Krabi hotel has concocted his own version, cooked and presented in traditional Southern Thai style. Thai chef creates new twist to Massaman Curry following CNN award.

Described by CNN Travel as “the king of curries”, massaman originated among Muslim communities in southern Thailand and the Malay peninsula. Its lip-smacking sauce stands as testament to the myriad flavours of traditional Thai cuisine, and includes: cardamon, cinnamon, cloves, nutmeg, mace, bay leaves, cumin, star anise, chilli peppers, coriander, lemongrass, galangal, shrimp paste, shallots and garlic. The result is a fragrant bouquet and a tingling-tongue sensation that can last for hours.

Relatively low in calories and high in nutrition, massaman curry is usually accompanied by chicken, but can also be served with beef, duck or mutton, while vegetarian versions invariably include tofu.

“We’re using nothing but the freshest local produce, including a few secret ingredients, combined with soft stewed Australian Rib-eye, fresh coconut milk, peanuts and sweet potato,” Chef Jakkrit said. “We hope this will be a mouthwatering meal to remember.”

Chef Jakkrit’s Beef Massaman Curry is now available at Saffron Restaurant, the signature dining venue at Banyan Tree Krabi, which is situated on an elevated hillside overlooking one of Thailand’s most iconic natural wonders: the towering limestone cliffs that jut out of the sea in Than Bok Khorani National Marine Park.

Banyan Tree Krabi is located on tranquil Tubkaek Beach, a 45-minute drive from Krabi International Airport or 30 minutes north of the more popular seaside towns of Railay and Ao Nang.

The resort, which opened in October 2020, features 72 villas and suites, each with its own private pool. Facilities at the hotel include two restaurants, a beach bar, a kids’ club, a fitness centre, a meeting centre, an elevated outdoor wedding deck, and in keeping with Banyan Tree’s global wellbeing branding — a rainforest-themed spa.

Executive Chef Jakkrit Traibun was previously sous-chef at Banyan Tree Samui for seven years. He is a southern Thai and specializes in the aromatic and spicy flavors of that culinary style.

“Saffron Restaurant offers fine dining with an emphasis on Thai cuisine with a contemporary twist,” he said. “Our aim is to put Saffron high on the list of top restaurants in Southern Thailand.”