Hotels Across Vietnam Get Behind Earth Hour 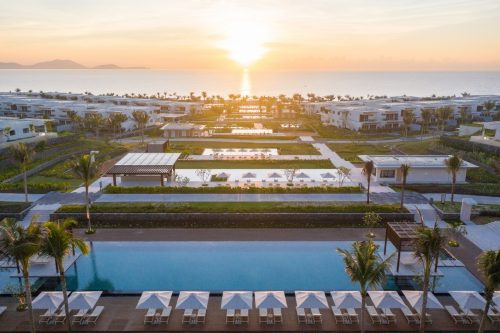 Alma Resort Cam Ranh – In the weeks leading up to Earth Hour, staff at Alma have been collecting plastic garbage, including waste washed up on Long Beach, to craft a 2.6m-long and 2m-high fish statue in readiness for March 27. The bold statement is designed to remind guests and staff alike of the damage plastic polluting the ocean inflicts on marine life and encourage people to recycle plastic where possible or, preferably, avoid it altogether. Alma will hold activities throughout the day to mark Earth Hour, including a tree-planting hour, a “green” walking tour for children, and a “back-of-house” tour for adults to demonstrate how the resort is using technology to lessen its carbon footprint. For VND 750,000 (USD 32) nett per person, the resort will host a free-flow cocktail party with live music followed by a seafood and barbeque buffet on the lawn at beachfront restaurant Atlantis followed by fire dancing and a beach bonfire. The resort is also urging guests to turn off lights and unnecessary electrical equipment from 8.30-9.30pm as well as walk instead of using resort buggies.

The Anam Cam Ranh
To educate guests about the dire need to protect our planet’s coastal seas, The Anam will host an Earth Hour dinner by Long Beach and screen an episode of Our Planet at its outdoor cinema under the stars. Amid the glow of a beach bonfire and candle lanterns, The Anam will serve dinner platters between 6.30pm and 9.30pm. Priced at VND 900,000+ (USD 39) each and accompanied by two beers or soft drinks, the platters for two include fresh spring rolls, papaya salad with dried beef, grilled chicken wings, corn, potato and more. The resort will also urge guests to switch off the lights and any other electrical devices in their rooms from 8-9pm. Our Planet: Coastal Seas, narrated by Sir David Attenborough, will air at the outdoor cinema by the beach from 7-7.50pm. According to Attenborough: “Coastal seas count for 7% of our ocean, yet they are responsible for 95% of the world’s marine production – these are our planet’s fishing grounds. Despite their importance to humanity, few are protected. Yet wherever effective protection exists, life bounces back in huge abundance. The wildlife will thrive, and we will catch more fish.”

Azerai Resorts
Azerai La Residence, Hue is collaborating with Hue Tourism College to organize a candlelight piano concert to mark Earth Hour on the evening of Mar. 27. The resort is also participating in its first-ever Earth Hour “Virtual Spotlight,” encouraging social media followers to share some of their favourite Earth Hour videos. The person who submits the most-watched and most-liked video will receive a voucher from the hotel. Meanwhile, Azerai Can Tho and Azerai Ke Ga Bay will turn off their landscape lighting for an hour on March 27 and replace those lights with paper lanterns and candles around their swimming pools. To further raise awareness, both resorts will share with guests a note upon check-in, and during turndown service, highlighting Earth Hour’s goal overarching: to convey the urgency of the climate crisis. Set on a private islet in the Mekong Delta, Azerai Can Tho has long been committed to promoting sustainability. The resort features a solar power plant that generates up to 2,500 Kwh of electricity, covering much of its power needs. It has also adopted solar-powered buggies, installed a high-tech, eco-friendly sewage treatment plant, eliminated the use of plastic and more. Staff at the resort regularly participate in river clean-up activities and Azerai Can Tho is involved in efforts to preserve the local mangroves.

Sofitel Legend Metropole Hanoi
For 90 minutes on March 27, between 8pm and 9:30pm, Sofitel Legend Metropole Hanoi will mark Earth Hour by switching off all non-essential lights in public areas of the hotel, including outside on its iconic facade, canopies and terrace. Empty guestrooms and the hotel’s office will also go dark to raise awareness about the importance of environmental protection and preserving our natural habitat on Earth. Meanwhile, the hotel’s restaurants and bakery shops will feature minimal electric lighting, instead relying mostly on candles for illumination. Metropole Hanoi is meanwhile taking other steps toward greater sustainability, including by swapping out plastic bags in favor of paper ones wherever possible.

Best Western Takes Off with New Hotel at Bangkok’s Airport