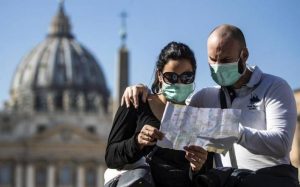 The comprehensive report also showed the EU is the largest region in the world in terms of international spending at a staggering 427 billion Euros in 2019, representing 6.2% of the EU’s total exports.

Leisure spending helped generate jobs throughout the EU with analysis from the report showing across the EU it accounted for an overwhelming 81% of all cash spent, compared to less than a fifth (19%) for business.

The largest EU economies in terms of total Travel & Tourism contribution to GDP were also revealed to be Germany (US$347 billion), Italy (US$260 billion), France (US$229 billion) and Spain (US$198 billion).

“Our analysis underscores how vital the Travel & Tourism sector will be in powering the recovery of the EU economy, generating new jobs and driving visitors back, having a positive economic domino effect on suppliers large and small throughout the industry on the continent.

“Until then it is crucial that all governments throughout the EU help to protect a sector which is the backbone of the European and global economy, which is currently in a fight for survival with up to 75 million jobs globally are at immediate risk, with 6.4 million at risk across the EU alone.”

On a global level, the Travel & Tourism sector outperformed the 2.5% rate of global GDP growth for the ninth consecutive year in a row, thanks to an annual GDP growth rate of 3.5%.

This made it the global economy’s third highest sector in terms of GDP growth. The EIR shows the sector supporting 1 in 10 jobs (330 million), making a 10.3% contribution to global GDP and generating 1 in 4 of all new jobs.

A breakdown by WTTC shows the Asia Pacific to be the top performing region worldwide with an impressive growth rate of 5.5%, followed very closely by the Middle East at 5.3%. The US demonstrated a steady growth rate of 3.4% and the EU 2.4%, while the fastest growing country was Saudi Arabia.

WTTC Report on How Tourism Can Help Eradicate Human Trafficking

WTTC Responds to Relaxing of Restrictions Across UK