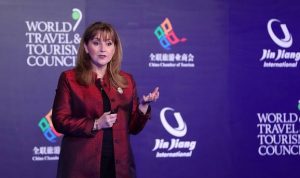 Here are ten key takeaways from this year’s discussions:

1. China is at the centre of the global Travel & Tourism growth

For a number of years, our research has shown that China is the undisputed champion in terms of Travel & Tourism growth. In fact, 2018 saw a 7.2% increase in GDP growth from 2017 compared with a 2.2% increase from the United States. WTTC President & CEO Gloria Guevara explained that 50% of the employees in our sector are in this region, with Daniel Aylmer, COO, IHG Greater China adding “This is only the beginning of the speed of growth”.

2. Chinese cities are in a league of their own

When it comes to megacities, China leads the way. Shanghai is now ranked as the largest city by Travel & Tourism volume. In fact, according to our new research, in 2018, 5 of the top 10 fastest growing cities in the world were in China. This growth has been supported by tremendous investment in Asian cities according to Shengkang He from the World Tourism Cities Federation (WTCF).

While outbound tourism generates most of the headlines, the importance of domestic tourism to the Asian market cannot be overlooked. China alone has around 5.5 billion domestic travellers annually. In addition to the 9 million international tourists Shanghai attracted, it welcomed 160 million visitors from other Chinese provinces. In South East Asian nations such as Malaysia, Thailand and Indonesia, native tourists have taken full advantage of low-cost air travel for shorter breaks. In fact, domestic Travel & Tourism spending in Indonesia helped support 6.0% of the nation’s GDP in 2018.

4. A booming middle-class is fueling growth

Underpinning the growth in Asia is the rise of the middle class — particularly in China. As Ping Wang, Chairman, China Chamber of Tourism points out, “The Chinese middle class is growing rapidly. We had 100 million middle class population 10 years ago, but it has grown to 300 million last year. It is foreseeable that in the coming years the number will increase to 400–450 million.” The Chinese middle class has very high spending power, they are very interested in the Asian market and are very willing to spend on tourism.

5. Asian travellers are still the biggest spenders in the world

When it comes to spending power, Asian travellers lead the way. Despite the slowdown of the global economy, Chinese travellers in particular show no signs of curbing their appetite for spending money abroad, currently accounting for one-fifth of the world’s total spending on Travel & Tourism.

6. The soul of tourism is culture

Two authentic cultural performances from the Chinese Indigenous Miao People’s Fan-Pai Drum Dance and the Māori dance group from New Zealand, showcased the rich diversity of the region and highlighted that culture is the real jewel in the crown of Travel & Tourism. Wei Qiu, Chairman, USUNHOME Group said that “The soul of tourism is culture” and Budi Tirtawisata, CEO, Panorama Group went further — “Cultural tourism activities can reduce the gaps between the poor, unfortunate ones and the fortunate ones”. Authenticity is also key as Steffan Panoho, Head of Tourism, Auckland Tourism, Events and Economic Development (ATEED) pointed out, “For us it’s about authenticity. It’s about putting people first and making sure that we’re engaging with our communities properly”.

Despite recent growth trends, the impending trade tensions between China and USA were raised by Tommy Wu, Senior Asia Economist, Oxford Economics (inset). Added to the global outlook, there are still a range of social issues that need to be addressed across Asia to enhance prosperity. According to Ping Wang, Chairman, China Chamber of Tourism “We must build a better mechanism for dialogue. Many countries in Asia are still living in poverty and they are still underdeveloped. There is a Belt and Road Initiative in China and yet they still need 20–30 years of investment in their infrastructure and tourism”.

8. Dispersion as a solution for destination stewardship

Overcrowding in destinations has featured in media across the world this summer, but many parts of Asia are behind the curve when it comes to planning for peak season and avoiding large crowds. In a discussion around Destination Stewardship, Michael Merner, Executive Vice President Asia & Oceania for AVIAREPS stated that “dilution is the solution to tourism pollution”. There was also a call to action from Simon Williamson, Chief Merchant, China, Value Retail China for OTA’S to work harder to help support the key attractions around the world by advising consumers at the point of travel when they’re booking their airline tickets or hotels that in fact they are booking in peak time.

9. Trip.com have been planting trees for over a decade

From protecting the environment to running volunteering teams and programs, Trip.com are no strangers to responsible travel. Jane Sun, CEO, Trip.com mentioned that to date, they have also planted over 1.1 million trees. She highlighted the value of tourism to society as a whole, noting that “travel is the best way to bring people together, to enhance our mutual understanding, and to promote global peace”.

10. We need to prioritise opportunities for future generations

Xiaomei Li, Chairman and General Manager, Yunnan Mekong Group mentioned that the new generation of talents in the Travel & Tourism industry needs to be equipped with a combination of cross-sector comprehensive skills. If these opportunities are also aligned to the sustainability curve, as Bernardo Cabot, Vice President Asia Pacific, Melia Hotels International mentioned, then so much the better.

WTTC to Hold Global Summit in Cancun in March 2021

WTTC is Proud to Present Second Event in One Voice Series