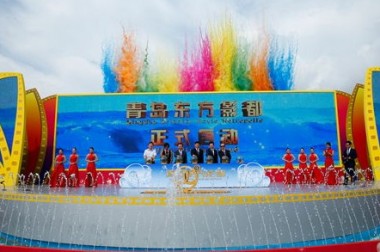 Qingdao (China) – September 23, 2013 – A launching ceremony was held for the Qingdao Oriental Movie Metropolis, a film and television industry project with the world’s largest investment funded by a total investment of more than 50 billion yuan from the Wanda Group. Over 30 billion yuan of the total investment will be allocated to cultural tourism projects.

Qingdao Oriental Movie Metropolis will boast multiple scenic designs such as the European Continent, ancient Chinese capital in the Ming and Qing Dynasties, and the Arab world. The production area has 20 studios, including the world’s largest 10,000-square-meter studio and the world’s only fixed underwater studio. The production area also has world-class sound, mixing and animation facilities as well as costumes, props, equipment processing plants, and a global IMAX R&D center. In addition, it has the largest film museum and film and television celebrity wax museum in China.

The Industrial Park will build the world’s largest film and television exhibition center, with one 3,000-seat and one 1,000-seat large theaters, a large 2,000-person banquet hall, and several smaller theaters and conference rooms.

Qingdao Oriental Movie Metropolis has many projects that are unique in the world. The world’s only car limit show theater designed by world artist Mark Fisher can accommodate 360-degree around the stage and car limit show, the world’s only high-tech car limit sports show offers great sensory excitement. The seaside hotels boast eight resort hotels, including one 6-star hotel, one 5-star hotel, two 4-star hotels, and four 3-star hotels, with a total of 4,000 rooms and 7,000 beds. The yacht club has 300 berths with a yacht trading center of 30,000 square meters. There will be an international yacht trading exhibition every summer. The seaside bar street has an area of 30,000 square meters. The international hospital has an area of 20,000 square meters. Wanda will bring in internationally renowned hospital brands.

The Wanda City in Qingdao Oriental Movie Metropolis is a super large cultural, tourist and commercial complex uniquely designed by Wanda. The Wanda City covers an area of 400,000 square meters with all indoor events. The large indoor theme park boasts the world’s only customized high-speed roller coaster. The large indoor water park has the world’s first indoor water roller coaster. The indoor movie paradise is the world’s latest movie entertainment technology project, an innovative product from Wanda. At the 3D motion theater “Flaming Mountain”, visitors take a 6-DOF dynamic seat to enjoy a stimulating experience in a three-dimensional world. At the 3D interactive cinema “Legend of Heroes”, in the world’s first combination of 3D interaction and roller coaster, visitors slug it out with virtual monsters on a speed moving platform. Wanda City also has Asia’s largest ultra-size movie theater including 30 screens with 5,000 seats, a large indoor ice rink and a variety of entertainment, dining and retail outlets.

In addition to building the world’s largest film and television industrial park, Qingdao Oriental Movie Metropolis intends to give maximum play to the industrial park’s comprehensive advantages. To that end, AMPAS, the world’s top four talent agencies including CAA?WME?UTA?ICM, and China Film Association have signed an agreement with Wanda to jointly support Wanda Group in hosting Qingdao International Film Festival in every September starting from 2016. The Film Festival is currently awaiting government approval. The Festival will feature an Oscar Day, when AMPAS will hold a series of theme activities. The AMPAS will carry out more cooperation with Wanda in the future. Meanwhile, the top four talent agencies have committed to inviting 30 international superstars and directors to participate in Qingdao International Film Festival every year. This is the first time in 86 years for AMPAS to throw its support behind film festivals outside the United States. Over the past dozen years, Cannes and Tokyo Film Festivals have repeatedly requested cooperation from AMPAS without success. Wanda Group Chairman Wang Jianlin said that, given the availability of a multitude of world-class resources, Wanda has the confidence and ability to elevate Qingdao International Film Festival to one of the world’s top international film festivals within three to five years, thereby changing the status quo of China’s lack of global film brands.

“Qingdao Oriental Movie Metropolis is a major measure to implement the national policy of building a cultural power, a major strategy for Wanda’s cultural industry development, and a major attempt to create China’s global cultural brands. Qingdao Oriental Movie Metropolis will revolutionarily improve the level of cultural industry in Qingdao, greatly upgrade the level of tourism in Qingdao, and even transform Qingdao’s positioning to turn it into a city of global film and television cultural tourism,” said Wanda Group Chairman Wang Jianlin.

That so many film and television industry giants and celebrities have come to Qingdao from all over the world to attend the launching ceremony of the Qingdao Oriental Movie Metropolis Film and Television Industrial Park demonstrates universal optimism about the development prospects of Qingdao Oriental Movie Metropolis. According to Wanda Group Chairman Wang Jianlin, China’s film box office revenue will surpass North America’s by 2018 and will double it by 2023. The future of the development of the world film market is right here in China, both because of China’s 1.3 billion gradually affluent population and because of the annual industry growth rate of over 4,000 quality annual movie screens. Wang further said that those in the world film industry who realize this first and are among the first to cooperate with China will be the first to reap the benefits.

The Soul of Jazz Exhibit Unveil at EPCOT

Last week’s developments include a new testing pilot at Pearson, the…

Harnessing the Power of Culture and Creativity in Tourism Recovery

INTO THE FIRE:New wedding trend blazes in Las Vegas