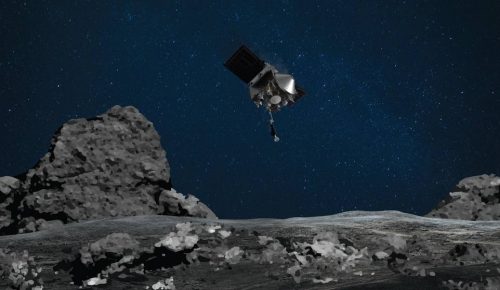 Bennu, Asteroid, 200 Mio Miles from Planet Earth, October 20, 2020 — NASA’s Origins, Spectral Interpretation, Resource Identification, Security, Regolith Explorer (OSIRIS-REx) spacecraft unfurled its robotic arm Tuesday, and in a first for the agency, briefly touched an asteroid to collect dust and pebbles from the surface for delivery to Earth in 2023.

This well-preserved, ancient asteroid, known as Bennu, is currently more than 200 million miles (321 million kilometers) from Earth. Bennu offers scientists a window into the early solar system as it was first taking shape billions of years ago and flinging ingredients that could have helped seed life on Earth. If Tuesday’s sample collection event, known as “Touch-And-Go” (TAG), provided enough of a sample, mission teams will command the spacecraft to begin stowing the precious primordial cargo to begin its journey back to Earth in March 2021. Otherwise, they will prepare for another attempt in January.

“This amazing first for NASA demonstrates how an incredible team from across the country came together and persevered through incredible challenges to expand the boundaries of knowledge,” said NASA Administrator Jim Bridenstine. “Our industry, academic, and international partners have made it possible to hold a piece of the most ancient solar system in our hands.”

At 1:50 p.m. EDT, OSIRIS-REx fired its thrusters to nudge itself out of orbit around Bennu. It extended the shoulder, then elbow, then wrist of its 11-foot (3.35-meter) sampling arm, known as the Touch-And-Go Sample Acquisition Mechanism (TAGSAM), and transited across Bennu while descending about a half-mile (805 meters) toward the surface. After a four-hour descent, at an altitude of approximately 410 feet (125 meters), the spacecraft executed the “Checkpoint” burn, the first of two maneuvers to allow it to precisely target the sample collection site, known as “Nightingale.”

Ten minutes later, the spacecraft fired its thrusters for the second “Matchpoint” burn to slow its descent and match the asteroid’s rotation at the time of contact. It then continued a treacherous, 11-minute coast past a boulder the size of a two-story building, nicknamed “Mount Doom,” to touch down in a clear spot in a crater on Bennu’s northern hemisphere. The size of a small parking lot, the site Nightingale site is one of the few relatively clear spots on this unexpectedly boulder-covered space rock.

“This was an incredible feat – and today we’ve advanced both science and engineering and our prospects for future missions to study these mysterious ancient storytellers of the solar system,” said Thomas Zurbuchen, associate administrator for NASA’s Science Mission Directorate at the agency’s headquarters in Washington. “A piece of primordial rock that has witnessed our solar system’s entire history may now be ready to come home for generations of scientific discovery, and we can’t wait to see what comes next.”

“After over a decade of planning, the team is overjoyed at the success of today’s sampling attempt,” said Dante Lauretta, OSIRIS-REx principal investigator at the University of Arizona in Tucson. “Even though we have some work ahead of us to determine the outcome of the event – the successful contact, the TAGSAM gas firing, and back-away from Bennu are major accomplishments for the team. I look forward to analyzing the data to determine the mass of sample collected.”

All spacecraft telemetry data indicates the TAG event executed as expected. However, it will take about a week for the OSIRIS-REx team to confirm how much sample the spacecraft collected.

Real-time data indicates the TAGSAM successfully contacted the surface and fired a burst of nitrogen gas. The gas should have stirred up dust and pebbles on Bennu’s surface, some of which should have been captured in the TAGSAM sample collection head. OSIRIS-REx engineers also confirmed that shortly after the spacecraft made contact with the surface, it fired its thrusters and safely backed away from Bennu.

“Today’s TAG maneuver was historic,” said Lori Glaze, Planetary Science Division director at NASA Headquarters in Washington. “The fact that we safely and successfully touched the surface of Bennu, in addition to all the other milestones this mission has already achieved, is a testament to the living spirit of exploration that continues to uncover the secrets of the solar system.”

“It’s hard to put into words how exciting it was to receive confirmation that the spacecraft successfully touched the surface and fired one of the gas bottles,” said Michael Moreau, OSIRIS-REx deputy project manager at NASA’s Goddard Space Flight Center in Greenbelt, Maryland. “The team can’t wait to receive the imagery from the TAG event late tonight and see how the surface of Bennu responded to the TAG event.”

The spacecraft carried out TAG autonomously, with pre-programmed instructions from engineers on Earth. Now, the OSIRIS-REx team will begin to assess whether the spacecraft grabbed any material, and, if so, how much; the goal is at least 60 grams, which is roughly equivalent to a full-size candy bar.

OSIRIS-REx engineers and scientists will use several techniques to identify and measure the sample remotely. First, they’ll compare images of the Nightingale site before and after TAG to see how much surface material moved around in response to the burst of gas.

“Our first indication of whether we were successful in collecting a sample will come on October 21 when we downlink the back-away movie from the spacecraft,” Moreau said. “If TAG made a significant disturbance of the surface, we likely collected a lot of material.”

Next, the team will try to determine the amount of sample collected. One method involves taking pictures of the TAGSAM head with a camera known as SamCam, which is devoted to documenting the sample-collection process and determining whether dust and rocks made it into the collector head. One indirect indication will be the amount of dust found around the sample collector head. OSIRIS-REx engineers also will attempt to snap photos that could, given the right lighting conditions, show the inside of the head so engineers can look for evidence of sample inside of it.

A couple of days after the SamCam images are analyzed, the spacecraft will attempt yet another method to measure the mass of the sample collected by determining the change in the spacecraft’s “moment of inertia,” a phrase that describes how mass is distributed and how it affects the rotation of the body around a central axis. This maneuver entails extending the TAGSAM arm out to the side of the spacecraft and slowly spinning the spacecraft about an axis perpendicular to the arm. This technique is analogous to a person spinning with one arm extended while holding a string with a ball attached to the end. The person can sense the mass of the ball by the tension in the string. Having performed this maneuver before TAG, and now after, engineers can measure the change in the mass of the collection head as a result of the sample inside.

“We will use the combination of data from TAG and the post-TAG images and mass measurement to assess our confidence that we have collected at least 60 grams of sample,” said Rich Burns, OSIRIS-REx project manager at Goddard. “If our confidence is high, we’ll make the decision to stow the sample on October 30.”

To store the sample, engineers will command the robotic arm to place the sample collector head into the Sample Return Capsule (SRC), located in the body of the spacecraft. The sample arm will then retract to the side of the spacecraft for the final time, the SRC will close, and the spacecraft will prepare for its departure from Bennu in March 2021 — this is the next time Bennu will be properly aligned with Earth for the most fuel-efficient return flight.

If, however, it turns out that the spacecraft did not collect enough sample at Nightingale, it will attempt another TAG maneuver on Jan. 12, 2021. If that occurs, it will touch down at the backup site called “Osprey,” which is another relatively boulder-free area inside a crater near Bennu’s equator.

OSIRIS-REx launched from Cape Canaveral Air Force Station in Florida Sept. 8, 2016. It arrived at Bennu Dec. 3, 2018, and began orbiting the asteroid for the first time on Dec. 31, 2018. The spacecraft is scheduled to return to Earth Sept. 24, 2023, when it will parachute the SRC into Utah’s west desert where scientists will be waiting to collect it.

Goddard provides overall mission management, systems engineering and the safety and mission assurance for OSIRIS-REx. Dante Lauretta of the University of Arizona, Tucson, is the principal investigator, and the University of Arizona also leads the science team and the mission’s science observation planning and data processing. Lockheed Martin Space in Denver built the spacecraft and is providing flight operations. Goddard and KinetX Aerospace are responsible for navigating the OSIRIS-REx spacecraft. OSIRIS-REx is the third mission in NASA’s New Frontiers Program, which is managed by NASA’s Marshall Space Flight Center in Huntsville, Alabama, for the agency’s Science Mission Directorate in Washington.

Encouraging the Recovery and Use of Space Resources