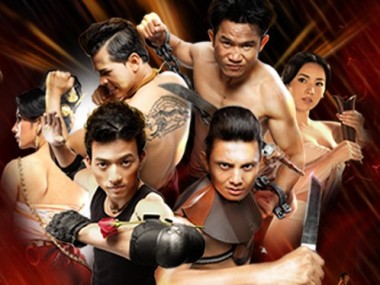 By offering Muay Thai fights in addition to its now classic stage show, MUAY THAI LIVE positions itself as the total Thai Boxing experience in Thailand: the only attraction combining entertainment, culture, drama and real Thai boxing in action.

Our goal is to offer a one-stop Muay Thai experience for audiences to learn all about the history of one of Thailand’s greatest gifts to the world. Besides the double-bill stage show and real live fighting, we also have an additional Muay Thai Museum in the plans, said Mrs. Viwan Karnasuta, Managing Director of Thai Show 2013 Co., Ltd. We shall continue to offer Muay Thai lessons by professionals including a Summer Camp for children, similar to last year, which turned out to be a great success. As such we will be setting up a Muay Thai Academy in August 2015 to better serve the growing number of boxing enthusiasts as a form of art as well as exercise.

The Stage @Asiatique with its 180 degree theatre style seating is also available to rent out for events ranging from product launches to conferences and talk shows, and the show itself can also be booked for private viewing added Mrs. Viwan.

MUAY THAI LIVE: THE LEGEND LIVES tells the untold story of the origins and heroes of Muay Thai, spanning 300 years, from the past to present day. Come face to face with Muay Thai’s greatest heroes, from the Tiger in Disguise to the Prisoner with Eight Limbs, to the Warrior of Broken Swords, and many more!

Perfectly suited for the whole family, the show takes the audience through an epic and colorful journey in time, going back hundreds of years to the inception of the sport all the way to present time.

Under the mentorship of Muay Thai Grand Master Sane Tubtimtong, a living legend in the traditional art of Thai Boxing, MUAY THAI LIVE BOXING: WARRIORS RISING will feature some of the rising stars of Thai boxing engaged in spectacular fights to win the night. Providing the raw and unadulterated

Experience of Thailand’s hugely popular martial art, MUAY THAI BOXING provides a fitting conclusion to THE LEGEND LIVES, showing how the ancient and sacred art of Muay Thai has turned into the most spectacular martial art in the world.

Audiences will also have access to an international standard souvenir and book shop featuring products related to Muay Thai and its rich history.

Opening on 5 February 2015, the expanded version of MUAY THAI LIVE and MUAY THAI LIVE BOXING: WARRIORS RISING” will perform nightly except Mondays, from 8pm to 9pm, at the Stage located within Asiatique, The Riverfront, a new ultra-modern museum-styled theatre on the bank of the Chao Phraya River.

For more information regarding rental of The Stage for events or for off-site staging of excerpt shows, please contact e-mail: nathapol@uaythailives.com or sirisopha@muaythailives.com.

Indonesia’s Leading International Travel Fair to be Held in June