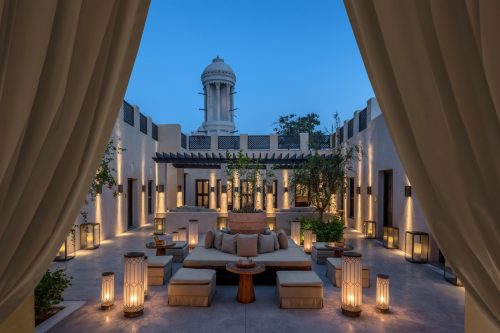 New York, New York, United States, October 13, 2021 / TRAVELINDEX / The Chedi Al Bait Sharjah and The Chedi Muscat won the no. 8 and no. 13 spots respectively on a list of the Top 20 Hotels in the Middle East published by Condé Nast Traveler in its Readers’ Choice Awards.

Announced in New York on October 6, the magazine’s 34th annual compendium of the world’s top hotels is the result of an extensive voting process that was conducted online, with more than 800,000 travellers casting millions of votes.

This is the third year in a row that each of these hotels, in the U.A.E and Oman, has won placement on the prestigious list. The Chedi Al Bait Sharjah opened in December of 2018 and has been recognized on the Condé Nast list in each year of its eligibility. The Chedi Muscat has won multiple placements since opening in January of 2003.

“We’re thrilled that The Chedi Muscat and The Chedi Al Bait Sharjah have been named to the list, and really happy that each of these properties has been recognized on this same list in each of the last three years,” said GHM Chief Executive Officer Tommy Lai. “This recognition is a testament to the hard work that our managers and associates put in every day to ensure the finest possible guest experience.”

Next year, GHM plans to open The Chedi Katara Hotel & Resort, Doha in Qatar. The hotel group is planning to open another hotel — The Chedi El Gouna on the Red Sea in Egypt – in the near future.