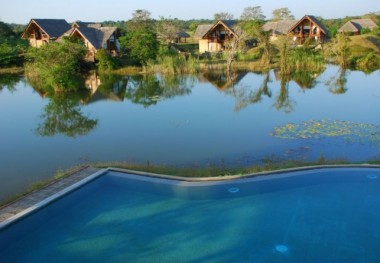 Colombo (Sri Lanka) – 31 March 2012 – We do not inherit the Earth from our ancestors, we borrow it from our children, as the Native American proverb goes. It is with this philosophy in mind that Jetwing Hotels will be participating in the Earth Hour campaign on March 31, 2012. Jetwing will be the first Sri Lankan hotel chain to do so and will be joining a global initiative to help protect our planet. Earth Hour is an international campaign initiated by the World Wildlife Fund (WWF) in order to inspire individuals, societies, businesses, and governments to combat climate change. Considered the largest environmental campaign in the history of the world, Earth Hour is a combined effort that takes place in March on the last Saturday of the month yearly from 8:30 pm-9:30 pm when lights are switched off for one hour. By being a part of this monumental movement, Jetwing Hotels will be joining the Eiffel Tower in Paris, the Sydney Harbour Bridge and Opera House, New York’s Time Square, and the Gateway of India in Mumbai.

Earth Hour was first put into practice in 2007 in Sydney, Australia. Over 2 million people and 2,000 businesses turned off their lights for an hour. By 2008, what had begun as a country-based event had panned out into a “Global Sustainability Movement” with a participation of 370 cities and towns in over 35 countries crossing 18 time zones. By 2010, Earth Hour had become a phenomenal environmental event with the amazing record of 1.3 billion persons taking part in 4616 cities in 128 countries and more than 5,200 cities and towns in 135 countries in 2011. 2010 also marked the beginning of Sri Lanka’s participation in this exciting event.

On March 31, 2012, Jetwing Hotels will be contributing to this exceptional event by switching off lights for an hour from 8:30 pm at all Jetwing properties across the country. Jetwing’s participation in Earth Hour is a continuation of their commitment to protect the environment not just for the people who inhabit the world at present but also for the generations that come after. Jetwing Hotels have always been at the forefront of promoting and initiating environmentally-friendly initiatives that educate and create awareness about our need to protect the planet, as well as sustainability measures and practices through the Jetwing Eternal Earth Programme (JEEP).

“Taking part in this year’s Earth Hour is not something we take lightly; we have a long-term plan to raise awareness about sustainability and green living. It isn’t just about switching off lights for an hour, but in doing so, saving the planet we live in a step at a time, and we sincerely believe in this effort,” said Hiran Cooray, Chairman of Jetwing.

Undoubtedly, global warming is the biggest crisis that mankind has ever had to face, with the world’s natural resources being exhausted at a more rapid rate than they can be replaced. Natural habitats and biodiversity are being destroyed, and exquisite flora and fauna face the constant threat of extinction; as a result, the world’s climate is and has been changed for the worse.

Firstly, in order to ensure greater sustainability, Jetwing Hotels have begun assembling together Green Directories with the intention of making sure that all their hotels follow high environmentally-friendly standards. As a result, from 2010 to 2011, Jetwing has achieved an amazing 22 percent reduction in its carbon footprint.

Similarly, Jetwing can proudly report that by using energy efficient LCD and LED TVs they have accomplished a 40 percent saving in energy consumption. Jetwing does not take its responsibilities or resources lightly, which is why the hotels use solar power and biomass boilers to generate hot water and have radically reduced their usage of plastic goods, and reuses recycled waste water within the grounds.

Under the umbrella of JEEP, Jetwing’s “Trees for Life” program began in 2008 to involve the community and visitors in the cause. For three years, Jetwing has planted over 3,000 trees in a model reforestation project at Hunas Falls Hotel and from January 20, 2012 the aforestation site was relaunched at St. Anne’s Shrine, Talawila in the Kalpitiya Peninsular. However, it is not just about doing but also about educating and empowering others to do and it is for this reason that each Jetwing Hotel has adopted two schools in the areas in which they are located. At each of these schools, resident Jetwing naturalists conduct interactive sessions to educate the children and make them aware of good “Earth Saving Practices,” thereby preparing the leaders of the future with policies that will help save the environment as well as protect their future.

Interestingly, what is quintessentially Jetwing is the ability for each hotel to also make their own individual eco-friendly policies that signify their commitment to protecting the environment as part of a larger whole while still maintaining their independent character. For this reason, Jetwing Vil Uyana uses electronic buggy carts for transport within the hotel. These carts are partly recharged using wind power. Jetwing Beach organizes bi-monthly beach cleanups and with the aim of making their office paper-free, they have begun a total computerization of the hotel system. In the cooler climates of Nuwara-Eliya, Jetwing St. Andrew’s has designed a wetland that is created to attract birds, butterflies, and dragonflies. Worth mentioning is the fact that 4 endemic bird species have been detected visiting the wetland.

Family owned and in the tourism industry for the past 39 years, Jetwing Hotels has surpassed expectation at every aspect. Building on their foundation of being passionate, as well as the experience of true, traditional Sri Lankan hospitality, constantly pioneering discoveries captures the essence of the brand. Such a strong statement and direction have enabled Jetwing Hotels to imagine, create, and manage marvels and masterpieces, where distinctive design and elegant comfort complement each other and the environment.

Through the Jetwing Youth Development Program (JYDP), many a youth in rural Sri Lanka has been empowered, and Jetwing has taken a number of them on board to become members of the Jetwing family.