Is the China Dream Possible for Rural Entrepreneurs? 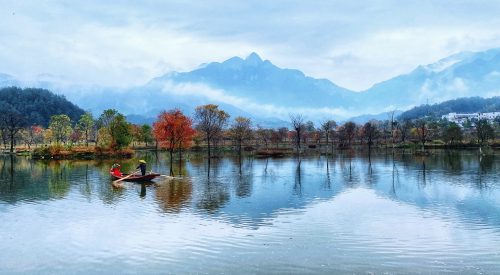 Tourism is a core, but highly volatile, component of China’s grand national strategy for modernisation, according to Dr Eric Chan of the School of Hotel and Tourism Management (SHTM) at The Hong Kong Polytechnic University and a co-author in a recently published research paper. The researchers find that less developed areas in particular desperately need to retain people and resources to strengthen their tourism offering. Drawing on a rich dataset of personal narratives, the study sheds light on the emerging phenomenon of urban-rural migration and offers guidance for rural destinations on strategically planning tourism employment and entrepreneurship. The findings may empower individuals to realise the Chinese dream of personal achievement and help less developed areas attract and retain capital for sustainable tourism development.

Although perceived by many as glamorous and contemporary, tourism jobs are uniquely demanding. As the researchers note, employees are expected “to be mobile, to change jobs frequently and to work their way from the bottom up”, which results in a very high turnover rate. This creates significant challenges for the tourism sector, they go on to mention, because “labour quality and stability ensure the sustainable development of tourism”.

Labour mobility is particularly high in developing countries such as China, where a large proportion of tourism jobs are informal. Although much is known about the mobility of developing country tourists, who might travel to holiday homes domestically or spend their summers abroad and winters at home, little is known about the supply side. “Overall,” write the researchers, “the experiences of labour migrants in tourism are in need of further exploration”.

Just as important as tourism employees are tourism entrepreneurs, whose creativity and innovation represent what the researchers label a “crucial component of sustainable tourism development and a vehicle for economic growth”. With the rise of tourism as a major economic driver, there is growing interest in examining the motivations of tourism enterprises and entrepreneurs.

According to the researchers, entrepreneurs and employees are usually treated separately in research on migration and mobility. However, as they also point out, “the movement of both workers and entrepreneurs to tourist destinations is the consequence of tourism development”, making it logical to explore the two together. Indeed, the two types of mobility have much in common, due to the unique characteristics of tourism, such as seasonality, a service-oriented and low-skilled workforce, and a social/lifestyle emphasis.

China offered the researchers a unique setting for their examination of migrant tourism employees and entrepreneurs. For decades, the country has experienced massive internal migration from rural to urban areas, with waves of farmers leaving impoverished agricultural communities in search of better lives in the cities. Unfortunately, few have been successful. Since the middle of last century, the hukou (household registration) system has drastically constrained mobility in China. “It is a tool for social and geographic control”, explain the researchers, “that denies farmers the same rights and benefits enjoyed by urban residents”.

If migrants from the countryside have found it difficult to obtain urban hukou , movement in the opposite direction was for a long time nearly impossible. However, things are starting to change. The researchers note that recent reforms by the Chinese government have somewhat relieved the barriers to mobility caused by the hukou system. Many rural areas have adopted tourism as a development strategy. The rise in employment and investment opportunities in the countryside has attracted both tourism workers and tourism entrepreneurs to less developed areas – part of a trend termed “counter-urbanisation” by the researchers.

Although migration studies have looked closely at mature tourism destinations in China, little is known about early-stage destinations, which are in great need of human and other forms of capital to support their budding tourism infrastructure. To explore how best to enhance the mobility required for tourism development in these areas, the researchers chose as a case study Luotian County in central China. As Luotian is “similar to thousands of other counties in less developed areas in China”, they hoped to gain representative insights into the motivations and experiences of employees and entrepreneurs entering the tourism sector in rural China.

The researchers visited 3 towns and recruited 26 tourism migrants in Luotian County – 11 entrepreneurs and 15 employees – to take part in the research. All were working on tourism and/or hospitality projects at the time of the study. In open interviews, the informants were asked to describe in detail their experiences of and motivations for tourism migration. The researchers also interviewed local government officials and collected relevant documents, such as policy briefs and tourism master plans.

The overwhelming majority of the tourism entrepreneurs interviewed were male, and they all held executive positions within their firms. The migrant employees were generally younger, with a more balanced gender distribution. They held a variety of positions in the local hospitality and tourism industry, ranging from secretary to security officer. Very few of the entrepreneurs had prior experience of tourism work; the employees either had longstanding careers in tourism or had entered the sector seemingly by chance.

Given the interviewees’ extremely diverse backgrounds and experiences of migrating to Luotian to work in tourism, they were expected to provide “in-depth perspectives on the experiences of human subjects in tourism development”.

Rigorous analysis of the interview transcripts, observational notes and documents revealed both similarities and differences in the tourism-induced mobility of the entrepreneurs and employees. In terms of motivation, the researchers report, “the employees’ decision making was more individualistic; they showed less consideration of the benefits they could bring to the communities”. The entrepreneurs held a long-term vision of success, with the support of overarching government policies. “Win-win is the ultimate goal”, one of them said.

Interestingly, however, most of the migrant employees themselves aspired to become entrepreneurs and start their own businesses. As the researchers note, “entrepreneurial goals are often praised and pursued in Chinese culture”. It seems that tourism migration may offer employees and entrepreneurs alike the opportunity to realise the “Chinese dream” of personal and professional achievement. Indeed, “upward social mobility was evident”, report the researchers, “as many migrants transitioned from being a farmer/villager or worker to being an entrepreneur or business owner”.

Clearly, both personal motivations and contextual forces have a part to play in attracting migrants to the local tourism sector. The study’s findings have important practical implications for tourism policy makers and planners in less developed areas. The invaluable human capital provided by incoming employees and entrepreneurs can only be sustained if migrants’ economic, social and personal needs are met.

To do so, the researchers suggest, rural governments should improve local living conditions and infrastructure to attract highly skilled migrants and tailor financial, training and education opportunities to “ returnee entrepreneurs and labour workers in their 20s and 30s”. To meet the needs of new migrants, rental housing should be better regulated and equal education and medical services provided for those with nonlocal hukou.

“With the development of infrastructure and technology”, write the researchers, “less developed areas in China will be able to attract more high-skilled migrants”. This is just one of the recommendations to emerge from the study, which casts light on some of the intrinsic challenges faced by the tourism sector – a lack of professional development, a low-skilled workforce and, above all, significant labour mobility – and suggests ways of overcoming them. As tourism becomes an increasingly vital driver of economic growth in China and beyond, this can only spell good news.