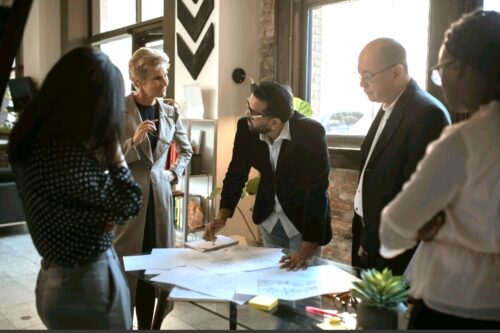 Sad to say, hotel managers – unwittingly or not – often hold negative perceptions of older workers. People older than 50 make up less than a fifth of all hotel employees. Where does this apparent aversion to employing older people come from? As a vital first step in addressing the low employment rate of older people in this sector, BSc graduate Sau Yin Cheung and Assistant Professor Linda Woo of the School of Hotel and Tourism Management (SHTM) at The Hong Kong Polytechnic University explored age stereotypes and job suitability assessments among hotel managers in Hong Kong. As well as putting age-related discrimination under the microscope, this pivotal advance towards age-inclusive recruitment could help to offset the negative economic impact of Hong Kong’s rapidly aging population.

The number of hotels that employ an older workforce is decidedly small, with only 3.1% recruiting people aged 65 years or over. However, “promoting the employment of older workers is an important way to reduce the negative economic impact of population aging and labour shortage problems of hotels”, say the researchers. If the industry is to increase these shockingly low figures, barriers to the employment of older people must first be identified.

One possibility is that some hotel managers hold negative perceptions of older workers and so prefer to hire younger people. A common “age stereotype” paints older workers as having poorer “hard” skills, such as physical and mental competence and willingness to adapt to technological changes.

That said, age stereotypes can also be positive. For example, older employees are often considered to outperform younger workers in terms of “soft” qualities, say the authors, “such as reliability, commitment to the organization, social and customer-oriented skills, accuracy, and emotional stability”.

Given the mixed bag of positive and negative age stereotypes, managers’ perceptions alone seem not to be able to fully explain the low employment rate of older workers. Drawing on existing models of decision making, the researchers attempted to delineate how age stereotypes are used by managers to staff their hotels.

In an ideal world, a candidate is suitable for a job when their experience matches the job requirements. Inevitably, however, job suitability assessments are also swayed by subjective perceptions of a candidate, including age stereotypes. “For instance, older applicants may be considered unsuited to the position of front desk agent”, explain the authors, “because this position is usually held by young people”. In other cases, “managers may expect older workers to be unable to meet the requirements of physically demanding jobs,” say the authors, “on the grounds that their physical condition is generally weaker.”

However, managers’ perceptions of older workers’ unsuitability for front-of-house positions and assigning older workers to physically challenging roles such as housekeeping are not well understood. To complicate matters further, the researchers tell us, “managers have been found to give socially desirable responses”. This may lead to inaccurate findings.

The researchers conducted in-depth interviews with hotel managers in Hong Kong to explore how age stereotypes might affect job suitability assessments in the hospitality industry and how to achieve a more age-inclusive industry.

In face-to-face interviews conducted from February to August 2018, the researchers quizzed hotel managers about their perceptions of older workers and how age impacted their job suitability assessments. The managers worked at 20 hotels in Hong Kong, where the hotel industry faces serious labour shortages. They were aged between 28 and 75 and had at least three years’ experience of managing 3- to 5-star independent or chain hotels. By including such a diverse profile of managers, the researchers were able to gain insights across experience levels, ages, and working environments.

During the semi-structured interviews, which each lasted for 30 to 60 minutes, the managers responded to five questions about their perceptions of employees aged over 50. The first three questions prompted managers to share their positive and negative perceptions of older workers. The final two questions encouraged the managers to express views about job suitability, such as which jobs they considered to be more appropriate for older candidates, and why. Transcripts of the interviews were examined in detail and content analysis was applied to unearth core themes and shared opinions.

The managers described both positive and negative stereotypes of older employees. On the positive side, older workers were believed to have a lower turnover rate and better work attitudes. The managers also valued the savings made in training costs from employing older workers. Unfortunately, the hotel industry tends to be less invested in developing the skills of older workers, who are unfairly thought of as less “trainable”. To address some of these issues, the researchers recommend that employees of all ages be given access to on-the-job training, which “should be designed to facilitate cooperation between younger and older employees”.

The managers also reported skewed negative perceptions of older workers, whom they believed to have more health problems, longer recovery times, and higher insurance and medical costs. In fact, such age-related differences in health insurance costs are negligible for hotels. They may even be offset by the savings brought by the lower turnover rate of older workers. “This stereotype may deter managers from employing a greater proportion of older workers in the future”, warn the authors.

Job suitability assessments were commonly influenced by the perceived appropriate age for a job. The roles of laundry attendant, kitchen porter, and security guard were considered best suited to older workers. In the hotel sector, a large proportion of back-of-house roles are already held by those aged over 50. Some of the managers claimed that older employees feel more comfortable with and communicate better with colleagues of a similar age. However, as stressed by the researchers, opportunities for older workers should not be limited in this way; they should be fairly considered for “every position, including guest contact positions, if their qualifications match the job requirements”.

This reveals a need for much more fairness in the recruitment process. “Hotel managers should reduce their age stereotyping and focus more on a person’s abilities, knowledge, and previous work experiences when making hiring decisions”, recommend the researchers.

Facing the economic burden of population ageing, it is becoming increasingly important for Hong Kong and other ageing societies to boost the employment rate of older people. The hospitality industry is no exception. Employing older workers would not only reduce turnover but also help hotels to respond to the needs of senior customers, a rapidly growing market segment. To offset managers’ skewed perceptions and suitability judgments, diversity training programmes should be provided for all employees. “This would increase employees’ understanding of and improve their attitudes toward age diversity,” the researchers conclude.

A Breath of Fresh Air for Luxury Hotels

Welcome to the Touch-Free Hotel

Drone Food Delivery is Taking Off