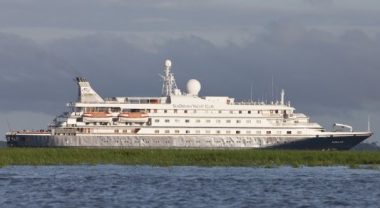 Bangkok (Thailand) – October 5, 2012 – Prompted by demand from its very loyal Club members, SeaDream Yacht Club has just released full details of its plans to sail a series of voyages in Asia and Northern Australia beginning in late 2013.

On completion of its 2013 Mediterranean season SeaDream II, one of lines award-winning mega-yachts, will sail to Asia. Sure to be a unique voyage, the “Passage to the Far East” will depart Athens, Greece in October 2013 and include a transit of the Suez Canal, excursions to Egypt’s fascinating archeological sites (accompanied by an Egyptologist) and calls to several other intriguing destinations before arriving in Mumbai, India. From Mumbai, the yacht will sail to Singapore and the Far East, and will offer 18 unique voyages in the region. Voyages are 7 to 15 days long, but most may be combined as a back-to-back voyage for a lengthier holiday.

“Whether you crave the peace and tranquility of undiscovered beaches and islands or the exhilarating energy and buzz of foreign cities, Asia offers something for everyone” said SeaDream’s President, Bob Lepisto. Adding, “Virtually every country in the region is accessible by water and SeaDream’s yachting itineraries include an incredible mix of commercial cities, pristine beaches and impressive historical sights. We’ve planned very unique calls, such as the little-visited islands of the Burmese Mergui Archipelago in the Andaman Sea and Sanya, on Hainan Island in China.”

Each voyage offers exciting and unique ports of call. Highlights include:
• Overnight, 2-day stay in Yangon, Myanmar (Burma), site of The Shwedagon Pagoda. Optional full day excursions by air to Mandalay and Bagan; a valley covered with 2,000 pagodas and temples.
• Yachting the beautiful Langkawi Archipelago of Malaysia.
• Visiting “the beach” (made famous by Leonardo DiCaprio in the movie “The Beach”) in the Phi Phi Islands of Thailand.
• Diving the vibrant underwater paradise of Thailand’s, Similan Islands National Park.
• Playing great golf in Malaysia, Phuket and at the Andaman Club, a five star golf resort & casino on Thahtay Kyun Island, Burma.
• Spending New Year’s Eve in Patong Bay, Phuket, Thailand. A night of fireworks and thousands of floating, candlelit paper “magic lanterns”.
• Exploring the world heritage site of Halong Bay, Vietnam; one of the seven natural wonders of the world.
• Seeing giant monitor lizards on Komodo Island.
• From Singapore, pre & post voyage overland packages to Cambodia including Angkor Wat and the many famous temples.
• From Singapore, a pre & post voyage overland package to Borobudur (UNESCO site) and Yogyakarta, site of the Prambanan Temple.

SeaDream first shared the news with their loyal guests and travel professionals, allowing their Club members to be the first to reserve space on what are expected to be highly sought after voyages.

Just released, the 2013 Berlitz Guide to Cruising & Cruise Ships, announced that the 112-guest mega yachts SeaDream I and SeaDream II have again achieved the top two ratings in the ‘Boutique Ships’ category (50 – 250 passengers). SeaDream’s itineraries include the Caribbean, Costa Rica, the Mediterranean, the Black Sea, Amazon and Asia. For more details about SeaDream’s cruises contact your travel professional, call Richard Jones on +6681 970 8487 or visit www.SeaDream.com

Marriott International announced today that it has signed an agreement with…