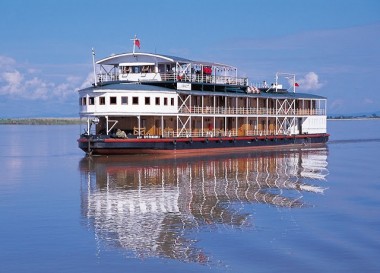 Rangoon (Myanmar) – June 29, 2013 – Sinmalike shipyard in Rangoon have been awarded the contract to build two K plus class vessels of 56 meters length with twenty deluxe staterooms. This is a new design with an ultra shallow draft of less than a meter enabling the ships to pass through channels that at low water would be blocked to other vessels.

These ships, the Kindat Pandaw and the Kalaw Pandaw, will be finished in traditional Pandaw style with teak and brass. Pandaw ships are unlike other river cruise ships being exact replicas of the Irrawaddy Flotilla Company ships of the 1920s with spacious promenade decks running around them.

Pandaw founder Paul Strachan says:
“it is wonderful to be building again in Burma where we started nearly 20 years ago. There is a lot of ship building know-how there and we can achieve the ultra shallow drafts so essential for the extreme low water conditions now prevailing. Last year vessels of over one meter draft could not pass from Pagan to Mandalay for over three months during the peak of the high season. At Pandaw we can not let this happen.”

The Kindat and Kalaw will operate on the new Mandalay Pagan Packet service starting in July 2014 together with the Indochina and Orient. These four ships will offer a total capacity of one hundred cabins / two hundred pax between these destinations weekly. The Mandalay Pagan Packet is s a stand alone product in and out of Mandalay International Airport obviating the need for hotels or domestic flights.

These new build’s will bring the Irrawaddy Flotilla up to seven vessels and the total Pandaw fleet up to twelve ships.

IATA: Passengers Confident in Onboard Safety

Canada finally has plan to open its border, the US does not; the Inca Trail is…