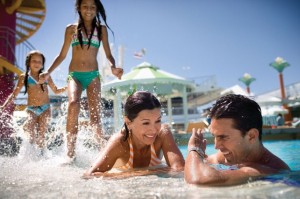 Miami – Jan 5, 2012 – To better meet the needs of the growing family vacation market, Norwegian Cruise Line announced today that it is revitalizing its current youth program and will implement a new best in class program fleet wide. The re-branded program will be introduced on Norwegian Gem in mid-February and will be rolled out to all of the line’s Freestyle Cruising® ships subsequently.

“More and more families are choosing a cruise for their vacation since it represents such a good value and offers so much for the entire family. In fact, close to 150,000 children sailed on our ships in 2010 and that number continues to rise,” said Kevin Sheehan, Norwegian Cruise Line’s chief executive officer. “We’ve already taken family programming to the next level by offering Nickelodeon experiences on some ships. Now, we want to make sure that we are continuing to offer the best possible experience for families. To do this, we are investing millions of dollars in revamping our youth and family programming.”

The current program, Norwegian’s Kid’s Crew in place since 1999, will be renamed and the age groups are being redefined to better address the skills and interests of children. The new age groups will be: three to five years; six to eight years; nine to 12 years; along with two teen groups: 13 to 14 and 15 to 17 years. There will also be programming for babies and toddlers ages six months to two years.

The new fully developed and enhanced curriculum tailored to each age group is being produced in conjunction with The King’s Foundation and Camps, a United Kingdom-based organization that provides high quality sport and activity programs designed to make a positive impact on children. More focus will be placed on sporting activities, arts and crafts, theater and technology. Activities will change every 30 to 60 minutes depending on the age group and will be set within blocks of programming time in the morning, afternoon and evening.

The new curriculum will also include creative themes, such as circus day, theater/technology/sports and port of call day. The company has engaged Cirque Du Jour, a New York-based company that specializes in teaching children real circus skills such as scarf juggling, ball juggling, plate spinning, clowning and acrobatics. Circus workshops and shows will also be offered for the entire family.

In addition, the youth programs will be expanded to utilize other areas of the ships, including the sports courts, rock walls, theaters, lounges and public spaces and will feature more family events such as parades and scavenger hunts.

“We want to ensure our youth and teens are engaged in the programs we offer and that they are having fun,” said Richard Ambrose, Norwegian Cruise Line’s vice president of entertainment. “We have designed this new youth program to cater to the specific interests and skill sets of children and teens to ensure that they are having the vacation of a lifetime.”

The company is also investing in its youth staff, by increasing the ratio of staff to children and establishing new criteria for the hiring of counselors, including the requirement of a college degree in recreation or child care (or the equivalent experience).

The line currently offers exclusive Nickelodeon family events, shows and activities on three ships: Norwegian Epic, Norwegian Jewel and Norwegian Gem (beginning mid-February). Activities include pool games, breakfast with the characters, where kids ? and adults ? can eat, sing and play with SpongeBob SquarePants, Dora the Explorer, Patrick, Diego and more; Dora’s Dance Party, where kids can join Dora and the Nickelodeon cast to dance and sing along; meet and greets with popular Nickelodeon characters, including SpongeBob SquarePants, Dora the Explorer and many more. In addition, there are also other family activities offered, including Nick Jr. story time, family trivia and special arts and crafts sessions.

Norwegian Cruise Line has already been recognized for its family programming as one of the best family cruises by Family Circle magazine; best onboard children’s program and best cruise ship for families (Norwegian Pearl) by Travel Age West magazine; and best family-friendly staterooms by Smarter Travel magazine.

More details of the new youth and teen program will be released in the coming months. Further information on Norwegian’s family offerings can be found on the line’s website. Families wanting to book a cruise on Norwegian to a variety of family-friendly destinations such as the Caribbean, Bermuda, Alaska, Europe and more, should contact a travel professional, call 866-234-7350 or visit www.ncl.com.