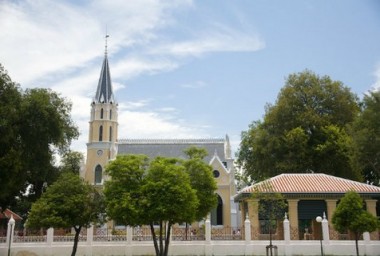 Bangkok (Thailand) August 30, 2013 – Wat Niwet Thammaprawat may be just one of more than 30,000 temples in Thailand, but it is certainly not your typical Buddhist temple. It is distinct from the others not only because it is located on an island in the middle of the Chao Phraya River, but also because it is the only western-style Buddhist temple in the country.

In 1878 King Rama V, who is highly respected by Thais for abolishing slavery in his kingdom, ordered the building of this remarkable structure. The small island on which it stands is opposite the Bang Pa In Summer Palace (where our Mekhala river cruise picks up and drops off our guests). The temple was used by the king for religious ceremonies while in residence at the palace, and is now classified as a first-class royal temple.

The singular most fascinating aspect of Wat Niwet Thammaprawat is its architecture. It was built and decorated in the Gothic style so characteristic of many of the great cathedrals of Europe. The distinctive Gothic architecture extends to the monastery, the assembly hall, and the bell tower. The only things that are made in traditional style are Buddha statues.

The temple’s assembly hall, where the principal Buddha statue is enshrined, is a most elaborately adorned building. The interior of the hall is reminiscent of Gothic cathedrals and churches with their pointed arches, arched doorways, arched stained-glass windows, and spires and pinnacles. There is a stained glass image of King Rama V above the doorway of the hall.

The temple can be reached by cable car from the Bang Pa In Palace. It is worth a visit.

Note: The temple may look like a Christian church but it is really a Buddhist temple. Please remember to take off your hat and shoes before entering any of the temple buildings.

The temple is open to the public every day without admission fee. Donation is accepted when using the cable car to get to and from the temple.