Air France Prepares for Arrival of New Airbus A220 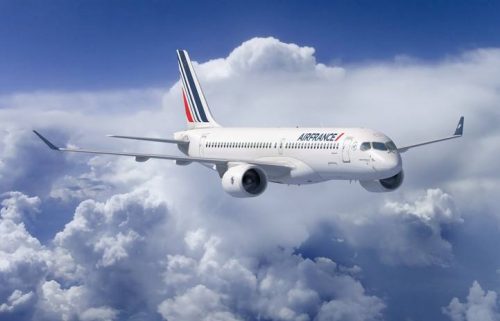 Paris, France, August 2, 2021 / TRAVELINDEX / Air France is continuing to renew its fleet. At the end of September, the airline will take delivery of the first of the 60 Airbus A220-300s it has ordered to replace its Airbus A318s and A319s on the short and medium-haul network.

The first Airbus A220 designed for Air France recently left the Airbus paint shop in Mirabel, near Montreal. It sports the new Air France colours and notably features the winged seahorse, the airline’s historical symbol embodying its rich history, at the front of the fuselage.

As it is made with lighter composite materials, the Airbus A220 uses 20% less fuel than previous generation aircraft, and has a 34% reduced noise footprint. It will play a decisive role in achieving Air France’s sustainable development objectives, including a 50% reduction in CO2 emissions in absolute terms on the domestic network from Paris-Orly and on inter-regional routes by 2024 (1), and a 50% reduction in CO2 emissions per passenger/km by 2030(2).

Before joining Paris to carry Air France customers, the aircraft will undergo a series of ground and in-flight tests. On its arrival, it will be used for more than a month to train the airline’s flight crews, some of whom began the so-called “type rating” process last summer.

As with every new type of aircraft entering the fleet, the company has set up two core groups, one made up of pilots and the other of flight attendants. These already qualified crew members will then be responsible for training their colleagues within the framework of in-house programmes validated by the authorities.

Last September, eight instructor pilots attended an 8-week theoretical and practical training course at the Airbus training centre in Montreal. They are currently training their colleagues – including another 28 instructors who complete the pilot launch team – notably using a Full Flight Simulator (FFS) mounted on jacks, and assembled at Air France’s flight simulation centre at Paris-Charles de Gaulle. Once Air France takes delivery of the first aircraft, this simulator training will be supplemented by approximately 20 flights in real conditions, with a view to obtaining the A220-300 type rating. Close to 700 Air France pilots will eventually be qualified on this aircraft.

The same core group system is being used for cabin crews, with 14 flight attendants trained in Zurich between September and December 2020. They are currently finalizing the training manuals and content that they themselves will be responsible for providing as from September 2021. The core group has selected and trained a group of 37 flight attendants to complete the practical flight training of cabin crews as soon as the A220 enters service. Two A220 door models have been installed at the Air France Crew Academy at Paray Vieille-Poste, near Paris-Orly, to train some 2,500 flight attendants.

In addition to the pilots and flight attendants, the entire company is preparing to welcome the Airbus A220. From maintenance to station staff, all operational sectors are getting ready for the arrival of this latest-generation aircraft.

The Air France Airbus A220 will be able to welcome 148 passengers in a 3-2 cabin configuration. Each seat will be equipped with type A and type C USB ports and all passengers will enjoy Wi-Fi access from their personal devices.

TRAVEL CONFIDENCE ON THE RISE: Many global tourists unconcerned about the spread of…