Scotland scores big in Time Out’s ranking of the world’s best 53 cities in 2022. Edinburgh takes the No.1 spot, followed by Chicago, Medellin in Colombia and Glasgow as number 4. Amsterdam rounds out the top 5.

The 2022 Best Cities Index was drawn up via a survey of 20,000 city dwellers around the world. Time Out says that the guide points ‘people in the direction of the places that locals are raving about’ and putting an emphasis on ‘the things that make cities great places to visit as well as to live’.

Edinburgh has been praised as the most beautiful and walkable city in the world by those polled.

1. Edinburgh
First-place Edinburgh is ‘the most beautiful city in the world’ and where ‘self-expression is encouraged.’

95 percent of residents say this year’s gold medal winner ‘is the most beautiful city in the world, and 93 percent claim it is also the most walkable city’ ideal for visitors who are looking to explore historic landmarks, architecture and scenic hotspots on foot.

2. Chicago
Chicago earned the second place spot with the second-highest food-and-drink-scene rating in the world, with 96 percent saying there is ‘great choice’, Time Out reveals.

Ninety-five percent of those polled say there is always something to do in the art and culture scene too, we’re told.

3. Medellin
Third in the ranking, Medellin was once the home of notorious drug baron and ‘King of Cocaine’ Pablo Escobar. But in 2022, new entry Medellin in Colombia is ‘the place to visit for those looking for a good time’.

According to the guide, Medellin tops the charts for its food and drink (97 percent) and nightlife and partying (90 percent) scenes, as well as ranking first for community spirit (94 percent).

Time Out also notes that there are plenty of ‘design-forward boutique hotels popping up all over the city, showcasing impressive Colombian craftsmanship’.

4. Glasgow
Glasgow, which ranks fourth, ‘excels at being outgoing and at going out’, according to Time Out. The second Scottish city to make the top five, Glasgow is described by 78 percent of the locals as the ‘friendliest city in the world this year’.

Time Out notes: ‘It’s also the second-most affordable city, with 87 percent saying it wasn’t expensive, making 2022 is the perfect time to visit and explore and meet the locals. It’s a city that excels at being outgoing and at going out.’

The guide recommends checking out the city’s ‘burgeoning dining scene’ and SWG3 – the ‘world’s first body-heated club’, where ‘dancing literally helps keep the lights on’.

5. Amsterdam
Fifth-place Amsterdam is considered “a city where (people) can be themselves … the easiest city in the world to express who you are (according to 89 percent of residents) and the second-most progressive in the world,” says Time Out.

Unsurprisingly, 100 percent of residents agree that their famously cycling-centric city is easy to cycle around. 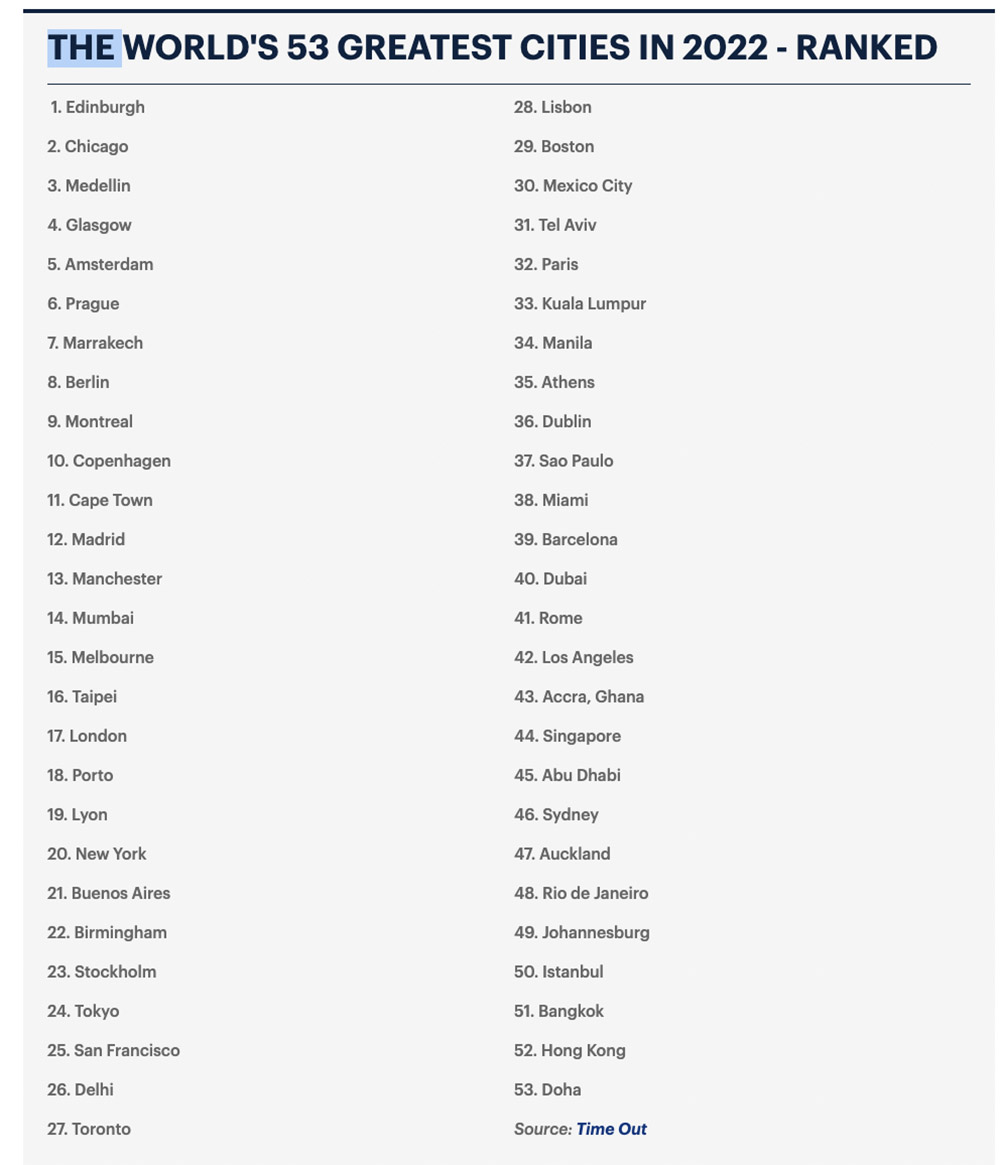