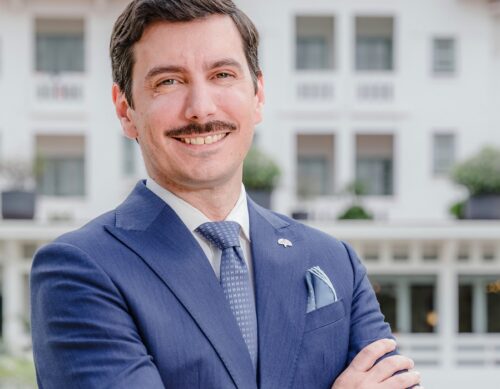 The American national brings nearly two decades of experience with Accor to his new posting in Siem Reap. Colina most recently served as General Manager of MGallery Sapa in northern Vietnam. He also previously worked as Hotel Manager for Sofitel Legend Metropole Hanoi, after launching his career in the U.S. with positions in Washington, D.C., Chicago and elsewhere.

“This is an exciting moment in Siem Reap not only as international travelers flock back to one of the world’s most extraordinary UNESCO World Heritage Sites but also as Raffles Grand Hotel d’Angkor writes the next chapter in its own legendary history, after celebrating its 90-year anniversary last year as a landmark heritage hotel in Southeast Asia,” Colina said.

The hotel reopened its doors in June 2022 following a major restoration project and pandemic-related closure that shut the hotel for nearly three years. Under the guidance of the Raffles Hotels group, Raffles Grand Hotel d’Angkor is once again at the forefront of travel to Southeast Asia. The hotel was recognized last year by the U.S.-based publication Travel + Leisure as one of the world’s top 500 hotels.

Nearly all of the hotel’s 119 guest rooms and suites were fully refurbished in the restoration, including with all-new Italian tiling and fixtures in the bathrooms. One of the hotel’s most distinctive attributes—its classic metal and timber elevator in the lobby—remains, as does the vintage ambience of The Elephant Bar.

Colina takes the reins amid other significant changes at Raffles Grand Hotel d’Angkor, including the launch of the Khmer fine-dining restaurant 1932 and the addition of the Raffles Marquee, an elegant events space overlooking a lush green lawn.

Raffles Grand Hotel d’Angkor originally opened in 1932 and is a national treasure whose storied history is a testament to Cambodia’s colorful past. The hotel was originally built as a rest stop for archeologists and adventurers seeking to explore the ancient kingdom of Angkor Wat.

ABOUT RAFFLES
Raffles Hotels & Resorts boasts an illustrious history and some of the most prestigious hotel addresses worldwide. In 1887, Raffles Singapore set the standard for luxury hospitality, introducing the world to private butlers, the Singapore Sling and its enduring, legendary service. Today, Raffles continues this tradition in leading cities and lavish resort locales, enchanting travellers with meaningful experiences and service that is both gracious and intuitive. Connoisseurs of life choose Raffles, not merely for its aura of culture, beauty and gentility, but for the extraordinary way they feel when in residence with Raffles. Each Raffles, be it Paris, Istanbul, Dubai, Warsaw, Jakarta or the Seychelles, serves as a venerated oasis where travellers arrive as guests, leave as friends and return as family. Raffles is part of Accor, a world-leading hospitality group consisting of more than 5,100 properties and 10,000 food and beverage venues throughout 110 countries.