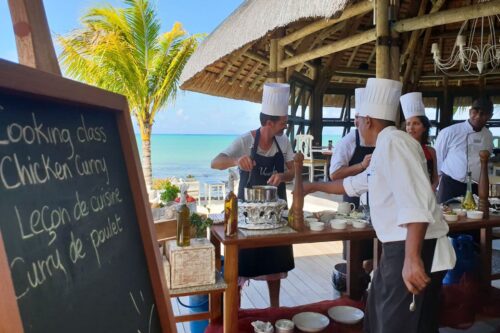 You may know the small island of Mauritius, located off the eastern coast of Africa, for its vibrant and growing tourist destinations. What you may not know is that Mauritius is also the case study for the Fight against Food Waste in the Indian Ocean.

In 2021, through a program titled “Zero Food Waste Mauritius” engineered by the UN-awarded LightBlue Consulting, it was discovered that by combining capacity building, food waste tracking through FIT (Food Intel Tech technology), data analysis and the implementation of a certification process, a positive impact could be created on food waste, on adopters’ own financial performance, and in encouraging circular systems.

These actions led to:

“We’re onto something,” Jeremy de Fombelle stated. As General Manager at the LUX Le Morne, he and his team oversaw 16,000 Kg of Food Saved and 40,000 Kg of CO2e reduced, which paved the path for LUX Le Morne to achieve The PLEDGE™ on Food Waste All-Star-100% certification.

De Fombelle is not alone on this crisis and the hospitality industry is seeing the winds change in the public consciousness. Krishna Sanmuthiya, Resident Manager from the Preskil Island Resort, has advocated for the holistic approach all the participating hotels have adopted. That also includes training personnel, hosting regular Food Lovers Committees, and sharing posters to make food waste awareness an important part of their kitchen day to day operations.

“We are convinced that our highlighted actions will enable us to reduce food waste at Preskil Hotel,” Mr. Sanmuthiya said, with Preskil Island Resort Mauritius saving 6,400 Kg of Food, reduce 16,000 Kg of CO2e, and thus earning The PLEDGE™ on Food Waste Certified-Silver-89%.

The Mauritius Project isn’t alone in this movement against food waste. Most recently, LightBlue undertook the Hyatt Project, involving eight different hotels under the Hyatt Hotels Corporation in the Asia-Pacific (APAC), which led to:

This project took place within a shorter time frame of four months.

From these two ambitious projects alone, we can see that seismic impacts can be made when actionable plans, guidance, technical training, and practical tools are implemented. Whether on a small island nation, across APAC, or beyond, the mounting food waste crisis doesn’t have to be accepted as the status quo.

And it all traces back to Mauritius. Mickaël Apaya, Head of Sustainability & Inclusive Growth at the Business Mauritius held a forward-looking perspective for Mauritius and beyond. “Our goal is to become a case study for other countries and destinations to follow suit.”

In late September 2022, the BDO (Mauritius) announced a partnership with LightBlue Consulting. “We clearly see the need for a structured approach to food waste prevention that helps restaurants and hotels cut significantly on costs,” said Pamela Leste, Senior Manager- Economic, Market Analysis & Sustainability and an accredited consultant for The PLEDGETM on Food Waste, “[It’s] also a fantastic tool to recognize the personnel’s efforts and show customers that adopters really care about the future of our island.”

With such clear results and actions taken, it is undeniable that Food Waste is a Choice.